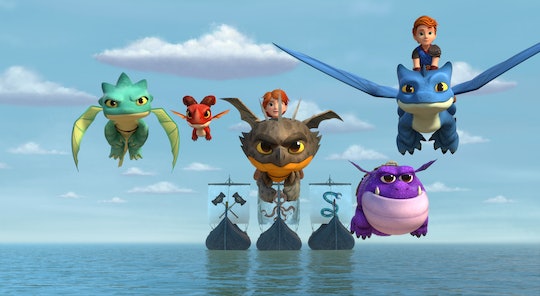 Get An Exclusive Peek At Netflix's 'Dragons: Rescue Riders' Special Airing This Month

Join the Rescue Riders in the race to find a golden dragon egg before it falls into the hands of evil pirates in DreamWorks Animation's upcoming special. While the Dragons: Rescue Riders special is coming to Netflix later this month, Romper has your first exclusive peek at the fun family comedy.

Fans of DreamWorks Animation's 2010 animated film How To Train Your Dragon and the subsequent Dragons: Rescue Riders TV series are sure to love the series' upcoming special, Hunt for the Golden Dragon. It sees adventurous brother-sister twins Dak and Leyla lead their team of five talking dragons into the treasure hunt of a lifetime.

"Kids are going to love this special because it is our craziest adventure yet," the show's executive producer, Jack Thomas, tells Romper. "We have chases, traps, puzzles, treasure maps and pirates!"

Take a look at the exclusive peek DreamWorks Animation shared with Romper for Dragons: Rescue Riders Hunt for the Golden Dragon to see what special powers the golden dragon claims to have.

"This special brings back one of my favorite characters, Waldondo Del Mundo, Marena's rascally old adventurer friend," Thomas says. "And it introduces two really funny new pirate characters, Erik the Wretched and Svetlana the Sly. Plus, we have one of the most unique dragons yet, The Golden Dragon."