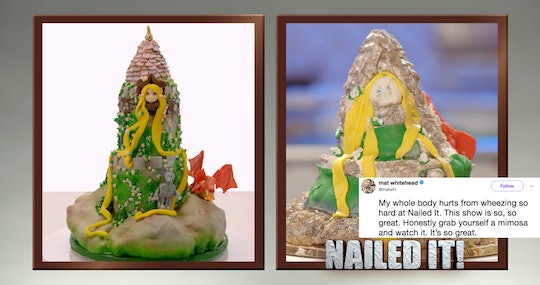 Netflix's New Baking Show Is So Good, It Has People BEGGING For More Episodes

If you've ever tried to recreate an impossibly cute cake that you saw on Pinterest and then wound up with a melting mound of brown and purple fondant, you've probably been tempted to post a picture of your failure with a dry, sarcastic caption: "Nailed it." Well, now there's a whole show about that. Netflix's Nailed It baking show brings your Pinterest fails to life and the hilarity is honestly next-level. Seriously, I had no idea that it would be this much more satisfying to watch people fail at baking than to succeed. I feel so understood right now.

Whereas normal baking shows like The Great British Bake Off or Cupcake Wars tend to make me feel like a failure who's never really achieved anything with my 28 years in this world, Nailed It makes me feel like I probably really could be a baker. Well, it makes me feel like I'm not the worst baker in the world, and at the very least that there are other people out there who are just as bad at baking as I am. Whether it's because of the terrible cakes themselves, or just the superior comedy of host Nicole Byer, this show will make you laugh harder than you've laughed all year.

If you don't believe me, just check out what everyone is saying on Twitter. Basically, we can all agree that this show is making our ribs hurt from laughing so hard. It's also making it difficult to carry on with our regular, daily routines because we're all stuck watching episode after episode instead of doing things like, you know, laundry. And even better, it's something that parents can feel comfortable watching with their kids, so it's the kind of fun that the whole family can enjoy.

I've been working really hard to avoid saying that Netflix "nailed it" with Nailed It, but I guess I can't help it. The show is the perfect antidote to perfectionist cooking shows and social media feeds that make your own baking skills feel like they're lacking. The truth is that nobody's life looks as mellow and beautifully filtered as what you find on Instagram or Pinterest. And try as you might, nobody's homemade princess cake has the face of a princess that looks like she was drawn by Disney. No, most people's princess cakes look like Toni's does on the show, with a bug-eyed princess and decapitated dragon.

"I don't mean to laugh but your princess is terrifying," Byer tells the grinning contestant. "I don't think anybody is coming to rescue her." The absolute best part of this interaction is that Toni completely agrees. When asked what she thought her princess would sound like, Toni began to talk in a low, gruff voice that sounds like a cross between Gilbert Gottfried and Smeagol. I love everything about this show. No one's feelings are getting hurt, and some average human with average baking skills will get to walk home with $10,000 for making the least terrible cake.

So if you've got a spare hour or two and you need a laugh, why not watch Nailed It to engage in some good-natured mockery of terrible bakers not at all unlike yourself. Unless, of course, you're actually a pastry chef in which case just try not to judge these contestants too harshly. After all, we're all just doing our best here. And also fondant is actually much harder to work with than it may seem.

Nailed It is currently streaming on Netflix.