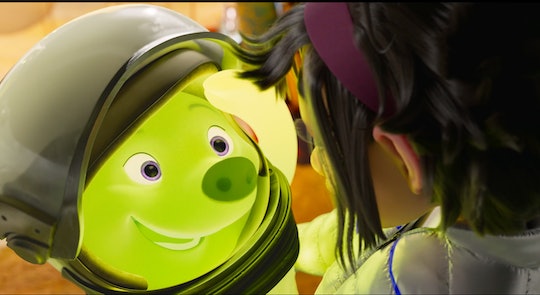 There's a lot to love about a film as imaginative and inspiring as Netflix's new movie Over The Moon. But one character your children are sure to fall in love with is Gobi, a fun and quirky creature residing on the moon. Thankfully, Netflix is giving Romper readers the chance to meet Gobi in this exclusive Over The Moon clip.

Directed by Oscar-winner Glen Keane and produced by Gennie Rim and Peilin Chou, Over The Moon tells the story of Fei Fei, a resourceful young Chinese girl inspired by the legend of the Moon Goddess Chang'e, a story her late mother used to tell her. When others dismiss the legend as merely a myth, Fei Fei puts her passion for science to use and builds a rocket ship so she can travel to the moon and prove Chang'e is real.

But if traveling to the moon wasn't adventure enough, young Fei Fei soon finds herself on an epic and rather unexpected quest after meeting Chang'e, who turns out not to be quite the goddess Fei Fei was expecting. While on her journey, Fei Fei discovers the whimsical land of Lunaria and all of the fantastical creatures that reside within it.

It's here in Lunaria that Fei Fei — and viewers — meet Gobi. Voiced by comedian and actor Ken Jeong, Gobi is... well, a glowing blob to put it bluntly. But as you can see in the exclusive clip Netflix has shared with Romper, Gobi is one lovable blob. His quirky antics are sure to have your kids laughing throughout the film.

Netflix's Over The Moon promises viewers beautiful animation, upbeat musical numbers, and an all-Asian star-studded voice cast that includes Cathy Ang, Phillipa Soo, John Cho, Ruthie Ann Miles, Margaret Cho, and Sandra Oh. It's been described by the streaming network as "an exhilarating musical adventure about moving forward, embracing the unexpected, and the power of imagination."

Get ready to blast off into a whimsical world when Over The Moon premiers on Netflix on Oct. 23.