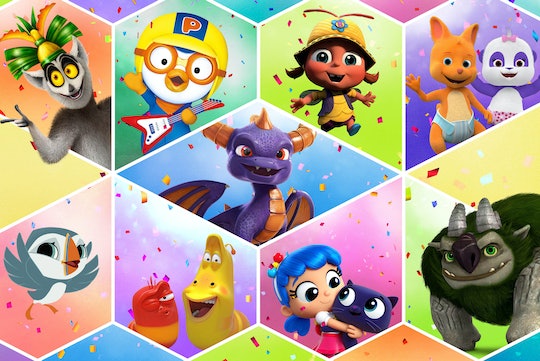 When you're a kid, the idea of getting to stay up past your bedtime for even an hour is thrilling, but when special opportunities like New Year's come up, they're almost impossible to resist. For a little person used to turning in early, waiting until midnight to usher in the new year is the height of excitement. However, it's less exciting for parents who have to deal with sleepless, grumpy kids the next day. That's why Netflix's New Year's Eve Countdown is the parenting hack you need to know about.

With Netflix's help, you can ring in the new year whenever you want — whether it's actually midnight or not. For four years in a row, the streaming service has provided several countdown videos geared towards kids. The on-demand countdowns tick down the last 10 seconds until it's time to party, but it leaves determining the hour totally up to the parent. You can celebrate New Year's Eve with your kids at six at night or two in the afternoon if you want; just search "countdown" or "New Year's Eve Countdown" in Netflix's search bar, pick the video you like best, and wait as the seconds run out. All the fun and none of the lost sleep! The videos were made available on Dec. 26, so they'll be ready whenever the time comes.

There will be nine different countdown videos that feature characters from different beloved kids shows, including Puffin Rock, All Hail King Julien, True and the Rainbow Kingdom, Word Party, Skylander's Academy, Trollhunters, Pororo the Little Penguin, Larva, and Beat Bugs. A handy video from Netflix gives you a preview of each and every one. With that many options on hand, there's sure to be at least one your whole family can agree on. But there's also no need to stop with just one — count down nine times if you feel like it. Who's stopping you?

The videos are a minute or two in length, opening with a short scene and a brief retrospective of the characters' year before easing into the countdown itself. They're quick and easy watches, then once it's all done you can put your little ones to bed and spend the rest of the night however you please. You can call your babysitter and head out for more grown-up New Year's Eve festivities, or you can simply take the extra time to catch up on your own sleep. Maybe stick to Netflix and settle in for a mini-marathon of some new show, welcoming 2018 with a binge.

The point is that it's totally up to you. The Netflix New Year's Eve countdown videos let you make the schedule and call the shots, rearranging the most perfectly-timed of holidays to fit your life. They're also a great way to introduce your children to New Year's Eve traditions that they'll be taking part in for the rest of their lives. You can even tell yourself it's educational — it doesn't hurt to get in a little more practice with counting, does it?

You should get to celebrate however you want, which can be a little difficult when you're juggling a million responsibilities. Nine videos on Netflix won't solve all your holiday dilemmas, whatever they might be, but hopefully they'll make things a little easier by allowing you to pencil in the merrymaking for whenever you choose. All you have to do is pick your kids' favorite characters, hit play, and have a few moments of family-friendly cheer before getting everyone to bed by a reasonable hour. Put off staying up late for just a few more years, and enjoy things on your own time.