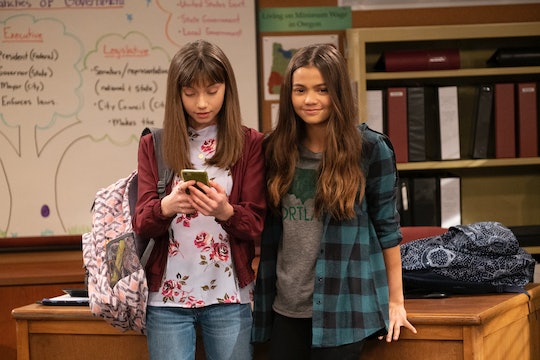 The Season 2 Trailer For 'No Good Nick' Is Finally Here

Season 1 of No Good Nick ended with the Thompsons one step closer to finding out the truth about Nick. Jeremy insisted Nick was hiding something, and now he finally has definitive proof that she isn’t who she claims. With such an epic cliffhanger, I’m sure fans can’t wait to see what’s ahead. Luckily, Romper has an exclusive look at the No Good Nick Season 2 trailer, and from the looks of it, Nick is still up to no good.

In Season 1, Nick (Siena Agudong), a teenage con-artist, shows up at the Thompson’s home, pretending to be an orphaned relative with no where else to go. The family — including father Ed (Seasn Astin), mom Liz (Melissa Joan Hart), and siblings Molly (Lauren Lindsey Donzis) and Jeremy (Kalama Epstein) — are kind hearted and sweet, so they agree to adopt Nick and let her move in.

Over the entire first season, it is revealed that Nick is after only one thing — money. Her con-artist father Tony is in jail, and under his direction, she scams the Thompsons to get as much cash as she can. However, through it all, her conscience peeks through, and the love and values she gets from her new family start getting in the way of her con.

In the Season 1 finale, after Liz and Jeremy get a look at Nick's public record and realize that the picture on file is of a completely different girl, they begin to question who the girl is living with them is. In the exclusive trailer for Season 2, Jeremy continues to pursue clues about Nick's true identity, while Liz insists the whole thing is an error on the part of the state. Nick lands a job at Ed’s bank as an intern, where she's plotting some kind of Mission Impossible-style heist. Ed praises Nick for being the “best," upsetting Molly, who later confesses to Nick that she is used to being the only daughter.

It looks like Season 2 will focus more on Molly and Nick’s friendship. In the clip, Nick admits that Molly is her “best friend” and that she “can’t hurt the Thompsons without hurting Molly.” Nick might find herself in the middle of a major moral dilemma, especially if she has to choose between her new BFF and her dad.

But, despite her new found love for the Thompsons, Nick is still up to her scheming ways in Season 2. “People say I’m too nice to lie, to cheat, to steal, but they have no idea,” she says in the trailer. “You have to keep your head in the game, it’s easy to get distracted. The lies are piling up, but I’ve got a new plan to get our lives back. The stakes are higher than ever — If you think you know what’s coming, you have no idea.” The trailer doesn’t reveal what Nick’s new plan is, but it does show her in the midst of some pretty shady business.

Season 2 of the show premieres on August 5. While you wait for Season 2, you can catch up on the entire first season of No Good Nick, which is currently streaming on Netflix.

Editor's note: This post has been updated with the show's Season 2 release date.