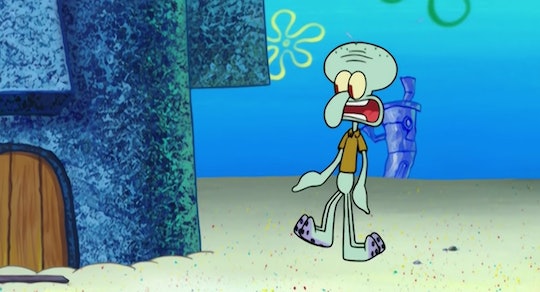 Are You Ready Kids? A 'SpongeBob' Spinoff About Squidward Is Reportedly In The Works

It appears that Netflix's recently-announced multi-year deal with Nickelodeon will bring some pretty exciting animated content to the streaming platform, including a fun spinoff of the SpongeBob SquarePants series. But who in Bikini Bottom will become Netflix's next big star? Netflix's SpongeBob spinoff will reportedly star Squidward, everyone's favorite grouchy neighbor.

While Nickelodeon's plans to develop a spinoff of its popular SpongeBob SquarePants series were first reported by Variety in February, details were scarce. In fact, at the time Nickelodeon President Brian Robbins said the children's television network was considering spinoff premises that would "tell an original story about SpongeBob and Patrick, or maybe tell a Sandy Cheeks stand-alone story." Robbins even floated the idea of giving Plankton his own show.

Now, however, Hypebae and The New York Times have reported that the forthcoming spinoff will be a "music-based project" that stars Squidward, SpongeBob's neighbor and co-worker at The Krusty Krab. While it's unclear what exactly is meant by "music-based," fans of SpongeBob SquarePants may recall that, along with being a general grouch and cynic, Squidward is an avid clarinet player. Could this be Squidward's opus?

When asked about a Squidward spinoff, a spokesperson for Nickelodeon tells Romper that, "at this time, no specific titles have been confirmed."

In February, Robbins told Variety that he thought fans of the network's original SpongeBob Squarepants series were "clamoring" for content that would delve deeper into exploring other characters in Bikini Bottom. And while I personally would have loved to see Gary finally get the leading role he so deserves, Squidward seems like a solid choice to anchor the first-ever SpongeBob SquarePants spinoff around. I mean, as BuzzFeed has pointed out, he is one of television's most relatable animated characters.

But fans of Bikini Bottom's resident yellow sponge need not fear; news of a spinoff doesn't mean Nickelodeon is abandoning the original SpongeBob SquarePants series, which has run since 1999. In fact, Robbins has dubbed the show Nickelodeon's "Marvel Universe" in comments to Variety back in February.

While reports of a Squidward-focused SpongeBob spinoff have yet to be confirmed (or denied), Netflix and Nickelodeon have announced a multi-year deal set to bring Nickelodeon-produced original animated content to the streaming platform. "Nickelodeon has generated scores of characters that kids love, and we look forward to telling wholly original stories that re-imagine and expand on the worlds they inhabit," Melissa Cobb, Netflix's vice president of original animation, said in a statement heralding the news earlier this month.

But whether it includes a SpongeBob spinoff or not, the recent deal between the two companies is meant to be an expansion of a partnership that recently brought Invader Zim: Enter the Florpus and Rocko's Modern Life: Static Cling to Netflix.