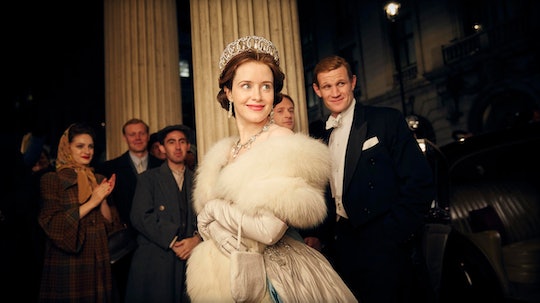 Everyone get your tiaras ready, because Netflix’s new original series The Crown has arrived — well, the trailer, that is! In a little under three minutes, The Crown trailer unveils the legacy of Queen Elizabeth II, and how the royal crown weighs heavy on her young shoulders. The show invites us to relive true events, and step inside the looking glass of the historical drama, romance, and scrutiny that the young Queen experienced first-hand.

In the trailer, the series really drills the name of the show into fans’ heads. So much so that I wouldn’t be surprised if audiences repeat “the crown” in their sleep in the same obsessive manner as The Lord of The Ring’s Golem during his “precious” chant. Perhaps the repetition of the words “the crown” is purposeful, making audiences as mindful and annoyed as the Queen by the ball and chain she wears on her head. In the brief clip, the crown is definitely not made out to be glamorous and shiny, but instead a heavy obligation — as echoed in it's harrowing, drained aesthetic.

By the end of the trailer, fans walk away feeling as if the show is more about a celebrity who has difficulty separating work from play, and dealing with the spotlight, more-so than the rule of a British royal. But the Queen lacks the freedom of most stars, as her regal priority is defined in the final shot of the trailer where we see her donning her crown. In this final moment her face looks lifeless, as if her duty has sucked out all that makes her who she is. She no longer lives life for herself, but for her country. She confirms this by looking into the camera, and thus into the eyes of her subjects. While this scene is taking place, a voice says, “the crown takes precedence” and the “crown must win," and in the war between “personal indulgences” and “duty” it clearly has.

This medium shot also works to reinforce how the crown will in fact reign supreme in Elizabeth’s love life as well. This is evidenced by the instance where her husband asks if she will make an exception for him when it comes to kneeling before her as Queen, and she lays down the law with the word “no.” Talk about tough as nails, but who can blame her? A queen demands respect. Besides, Elizabeth doesn’t have much time for love notes when she’s writing legislation and out shaping the world.

So throw your invisible crown on this fall, as you lounge like a princess and eat like a king while marathon-watching the series in it’s entirety Nov. 4, 2016. Long live Queen Elizabeth II, and long live Netflix!