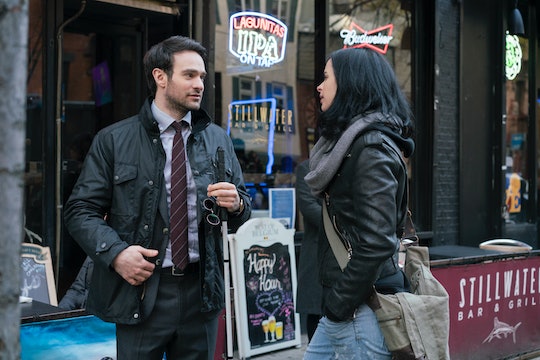 'The Defenders' Just Got A Premiere Date

With every new show introduced into the Marvel Netflix family, fans became more and more hyped for the day they would all join forces in a crossover series. It was definite from day one that Matt Murdock, Jessica Jones, Luke Cage, and Danny Rand would be teaming up to take down some baddies eventually, but as each show (minus Iron Fist) delighted fans, that future team-up seemed like it was going to be legendary. And now, after all that waiting, the finish line is finally in sight. Netflix's The Defenders gets a premiere date in a new promo, but it may not be obvious at first glance.

In the promo, Jessica, Luke, Danny, and Matt (rocking his Daredevil Season 1 makeshift black mask look) stand around impatiently in an elevator at Midland Circle Financial. That was the company the Hand was using as a cover back in Daredevil Season 2, giving fans a hint as to what villains might be in play in The Defenders. The promo is shot like a security tape, grainy and black and white with some classic elevator tunes playing over the action. Or lack of action – the heroes seem a little bored as they wait for their floor, until Jessica notices the camera and quickly cuts it off with a punch.

When the video stops, the timestamp in the top righthand corner reveals the release date for the series: August 18, 2017.

Entertainment Weekly also pointed out that if you were to take the numbers from the top lefthand corner of the tape (which read 23.253.120.81) and put them into your browser, it will redirect to a page for the New York Bulletin. That's the newspaper Karen Page works for, and the site features all kinds of relevant content like pictures of past front pages, exclusive interviews, a Heroes of New York section that features Claire Temple, and even an advertisement for Colleen Wing's dojo. Then if you scroll all the way to the bottom, you'll see a confirmation of The Defenders premiere date: "Watch Marvel's The Defenders All Episodes Streaming Only on Netflix August 18."

The promo also provides a glimpse of the heroes' first meeting, which takes place at Midland Circle. They all show up separately, each chasing their own mystery, and then cross paths just in time for a classic Marvel hallway brawl with the bad guys. It makes sense that four people running around fighting crime in Manhattan would eventually collide, and fans can't wait to see them do it. The Defenders can't come soon enough.