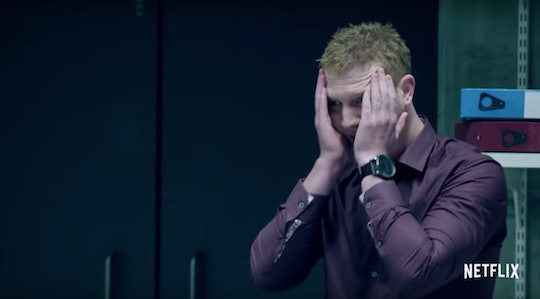 Netflix struck a deal to air three specials made by British illusionist Derren Brown, and the first will make its debut on February 27. It concerns a complex psychological experiment intended to say something profound about the human experience, but the trailer for Netflix's The Push wades into uncomfortably exploitative territory. The entire purpose of the project is to craft a situation that convinces one unwitting individual to commit murder, using a team of actors and a carefully planned scenario.

According to Entertainment Weekly, the experiment begins at a charity auction where a wealthy man has seemingly suffered a heart attack. After that, another man named Chris (who is unaware of being filmed) is put through the wringer in an attempt to discover if he can be manipulated into pushing someone to their death. The illusion is helped along by seventy actors, secret cameras, and pre-planned twists and turns (including, it seems, convincing Chris that he might get sent to jail if he doesn't commit the crime).

Throughout the trailer, Brown explains in voiceover and cutaways what he's trying to reveal by engaging in an openly manipulative experiment that could have lasting psychological effects on the person unknowingly caught in the middle of it.

Brown wants to see if social pressure can make someone take part in an unconscionable act, though one could argue that there are plenty of examples throughout history that prove such a thing happens regularly. According to Netflix's description of the show, the theory at the center of The Push is as follows:

"In The Push, Brown exposes the psychological secrets of obedience and social compliance. He expertly lifts the lid on the terrifying truth that, when confronted with authority, our natural instinct is to unflinchingly obey without question — to such an extent that even the most moral people can be made to commit the most horrendous acts, simply because they are told to do so."

That idea is expressed in the trailer as well, where Brown talks about "how readily we hand over authorship of our lives every day." It seems like The Push is about how easily people give in to coercion even more than figuring out what would have to happen to make one person kill another. But this isn't a case of simply being told to do anything, because as Brown made clear in the trailer, Chris was "enmeshed in a web of lies" on purpose to make him "feel like there's only one way out when he's told to commit murder."

Social pressure is one thing, but a series of scenarios constructed to result in a specific outcome is not quite the same. If you set out to push someone's limits to the extreme and make them believe no other choice is possible, is it really a fair test? Curious viewers will have to decide for themselves when the show premieres, because that could be yet another question The Push tries to answer.

One would hope that the show addresses every aspect of the theory it proposes, because the line between experimentation and exploitation seems incredibly thin in this instance. Chris, the man being made to jump through all these psychological hoops, did not sign up or prepare for what he would be put through; that may be the point, but there's no predicting how traumatic it might be for him in the aftermath.

The Push could be an interesting thought experiment, or it could be a total mess. With so many variables at play (and such high stakes), it will have a lot of work to do to prove its premise.