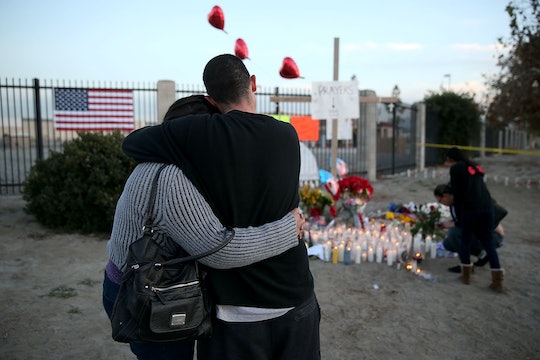 Unless you’ve been living under a rock (or a pile of laundry, more likely) for the past few weeks, you’ve probably thought about gun violence recently. There was the Colorado Springs Planned Parenthood shooting the day after Thanksgiving, the San Bernardino mass shooting yesterday, and another one today at a Walmart in Chicago. Gun violence and gun control has been about all anyone can talk about. Which is why it’s so shocking that Nevada assemblywoman Michele Fiore posed with guns in her family Christmas card. On Friday, Michele Fiore posted her annual Christmas card with her entire family — including babies — packing weapons. Her message to constituents? “It's up to Americans to protect America," Fiore wrote in the post. "We're just your ordinary American family."

Talk about awkward family photos. It’s pretty provocative that at a time when Americans are mourning innocent loved ones murdered with guns, by Americans. According to various trackers, there have been 353 or just 4 mass shootings this year. The numbers vary because different databases define “mass” differently. But it usually means that four or more people were killed with guns. Really, though, that’s just semantics. For the average American, what matters is that we have to walk around in a country where a shooting in a public place is entirely possible. And although our laws are such that it’s completely to own and carry a properly purchased and registered firearm, it seems a little off to pose in a holiday card, with kids and Christmas decorations, with firearms. It’s simply in bad taste, especially since every major news network has a scroll at the bottom of the screen, reminding us that the effects of gun violence are very, very real.

It also illustrates just how fraught the discussion about gun control is and how divided the country is about how to reform gun laws, if at all. When a politician from Nevada posts a picture like that, there are many that think “heck yes!” Others are taken aback. We need to start talking seriously about gun control and the reform of our gun laws. For the first time since 1920, the New York Times is running an op-ed on its front page Saturday making yet another call for gun reform. They write, "it is not necessary to debate the peculiar wording of the Second Amendment. No right is unlimited and immune from reasonable regulation."

And that's the most disturbing aspect of her holiday greeting. It isn’t the juxtaposition of holiday cheer with weapons (some of them are really big!). It’s the declaration that these guns aren’t for hunting game. They are to “defend” America. But all of the shootings on American soil this year were carried out by Americans. Police officers who make questionable decisions in an instant. Radicalized Americans. Racist Americans. Americans who don’t like U.S. abortion laws. It looks a lot like Americans need protection from themselves. Endorsing the use of firearms to “defend” or “protect” from imaginary enemies is a dangerous way to go about stopping the random, unncessary, and tragic mass killings plaguing us these days. Come on, Society, we can do better.