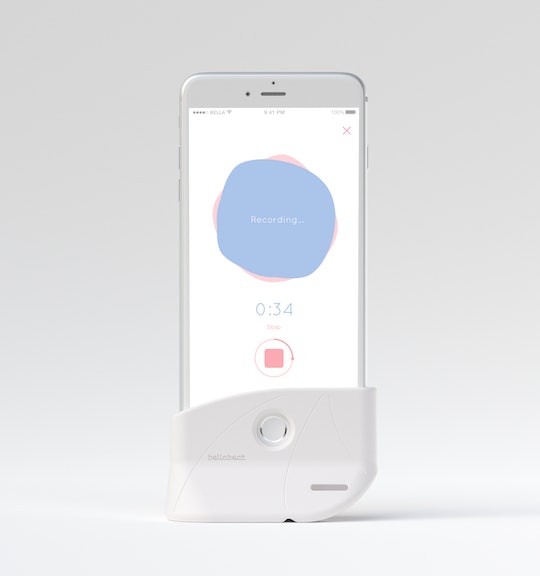 Pregnant? There's an app for that, of course. Most expectant parents are familiar with apps that track mom's diet, the due date, or the development of the fetus — today it's the size of a raisin! Tomorrow, a grape! But now pregnancy apps are becoming more sophisticated, in some cases even allowing parents to access services that are otherwise available only in a doctor's office. A new baby heartbeat app hitting the market just this week allows expectant moms to listen to, record, and share their baby's heartbeat.

The new app is Shell from Bellabeat, a startup founded in 2014 that focuses on women's health and wellness products. According to Bellabeat's blog, "Shell enables expectant parents to hear their baby’s heartbeat in a natural and non-invasive manner, similar to placing your ear on the belly and turning the volume up."

To access Shell, consumers will need two products: the Shell smartphone app, which debuted this week and is available for free download, and the smartphone base add-on, which goes for $70 and will be available in mid-December. According to Urska Srsen, Bellabeat's co-founder and CPO, there are already 1 million customers on the waitlist for Shell, and the list is 98 percent full.

Using Shell sounds easy enough. Expectant moms attach the add-on to their phone, then place it on their belly and wait for those sweet sounds. According to the Bellabeat website, the app filters out "background noise" and amplifies "the sound of the baby's heart." The app's developers told Digital Trends that the add-on includes an "acoustic horn," which is the part that users should place directly on their stomach. It's recommended to first test the device on one's own heart in order to become comfortable with the device.

The Shell is actually an updated version of a product that Bellabeat launched in 2014, which was also called the Shell but involved a device — called a monitor — that was separate from the smartphone, rather than a convenient add-on like this newer product. According to a 2014 Wired article, Bellabeat's products have always been aimed at enhancing a pregnant woman's ability to monitor her health at home. Co-founder Srsen's mom had been an OB/GYN in Europe, so Srsen was intimately aware of how busy doctors are, and how in-home monitoring can be beneficial.

However, many home-monitoring products on the market seemed "too complicated" to Bellabeat's co-founders. “We thought we had to find something that would motivate them [consumers] to do it; it had to be engaging and simple,” Srsen told Wired. This passion for empowering consumers to monitor their own health is abundantly clear at Bellabeat's website, which states that "88% of total health care spending is on preventable diseases. The future of health care lies in prevention, not correction."

While monitoring baby's heartbeat might strike some moms as a stressful endeavor, the fact is that moms are already instructed to monitor their growing fetus' health as it is: According to the American Pregnancy Association, moms should begin counting baby's kicks beginning at around 28 weeks.

With the Shell, moms now have a new, technologically sophisticated means of tracking baby from the comfort of their own home. Seems like a pretty cool development, and many expectant moms are sure to have it on their wish list this holiday season.

More Like This
41 Strong & Sweet Baby Boy Names That Start With “K”
Pelvic Pain During Pregnancy: What Causes It & How To Deal With It
What Is Acid Reflux Tape? Chrissy Teigen Swears By It
D-Mer Syndrome: Will It Come Back Again?