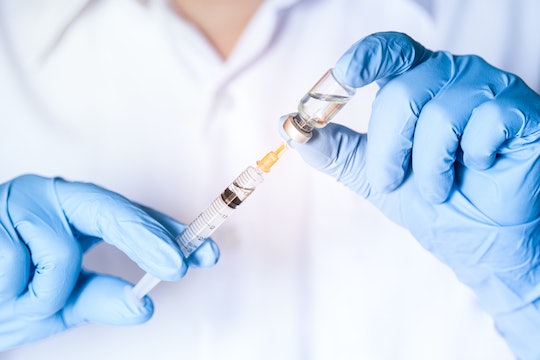 To vaccinate or not to vaccinate has become a loaded question nowadays. Measles outbreaks are currently at an all-time high, and though vaccines offer protection against a potentially deadly disease, many parents opt against them. To combat this public health issue, lawmakers in California have passed a new bill that aims to stop the creation of falsified medical waivers for vaccines.

Co-sponsored by the California Medical Association as well as the American Academy of Pediatrics in California, SB 276, which passed the Senate floor this week, is intended to reduce the number of falsified medical exemptions for vaccines, and assure that those who really need them, get them, according to the Los Angeles Times. The bill would essentially require physicians to go through a rigid set of steps before supplying parents and other patients with a medical exemption from vaccinations.

To get a medical exemption for vaccinations, with this law in place, physicians would need to certify that they examined the patient, then they would need to send the request for exemption to the state’s Department of Public Health. Next, the Department of Health would review the request along with the physician’s license number and professional history, according to The Sacramento Bee.

Health officials would also keep a record of medical exemptions, noting which doctors seem to be granting them more than others, and licenses could be revoked if anything turns out to be falsified, according to the Sierra Sun Times.

This isn't the first time California lawmakers have been proactive to combat the spread of potentially dangerous outbreaks. In 2015, the state banned personal belief exemptions, and since then the amount of medical related exemptions have skyrocketed, according to the Times of San Diego. State law also states that children must be immunized to attend public or private school. Under this new legislation, it's expected that 40 percent of exemption requests would be denied, according to the Los Angeles Times.

"SB 276 assures students who truly need medical exemptions will receive them and that the schools they attend maintain community immunity to keep them safe," Sen. Richard Pan, a pediatrician and co-author of the bill said in a written statement. "Through passage of SB 276, we are taking a preventive approach to keep schools safe for all students by applying a model successfully used in West Virginia, which has not experienced measles in a decade."

Parents who are against this new pro-vaccine legislation are speaking out, with some shouting inside the California Senate, "We will not comply," according to the Associated Press.

In the past, according to the Los Angeles Times, doctors would exempt children from getting vaccines for reasons such as having diabetes or asthma, even though research has shown that such medical conditions aren't linked to the intake of vaccines.

"Vaccinating our patients is one of the most important tools pediatricians have to prevent illness and death," Kris Calvin of California's chapter of the American Academy of Pediatrics said on Wednesday, as the Sierra Sun Times reported. "It is the rare physician who does not take this responsibility to heart, but they put all of us, our children and our communities, at risk. By ensuring medical exemptions to vaccines are reviewed and valid, this bill will protect the health of California's children and of our larger communities. It is a reasonable and urgently needed measure."

To date, over 800 cases of measles have been reported in 24 states, the largest amount recorded since 1994, according to the U.S. Centers for Disease Control and Prevention. Vaccinations remain an important part of keeping communities safe from preventable diseases, like the measles, and if fewer medical exemptions are given out when it's not completely necessary, then fewer children will be affected by a disease that had been, up until recently, eradicated long ago.