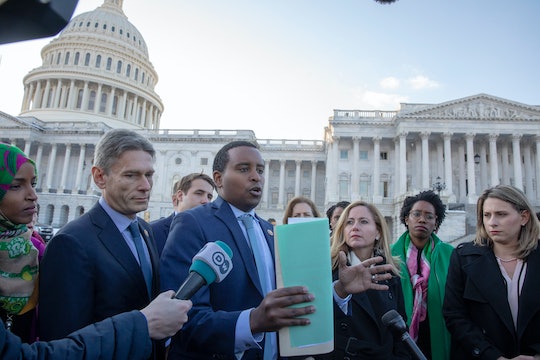 As we enter the fourth week of the United States government's partial shutdown, the consequences of so many departments and jobs being temporarily laid off are starting to be felt. Especially as the world shines a spotlight on the challenges of nearly a million federal workers going without pay. However, President Trump has signed a new bill that guarantees back pay for workers when the government reopens.

On Wednesday, Trump signed the "Government Employee Fair Treatment Act," AL.com reported, ensuring that the federal workers who have been away from work since the shutdown began on Dec. 22 will receive pay for all of the time they missed over the past month. The bill will assist as many as "340,000 government workers" who are off the job, as well as an additional 500,000 who are working but without compensation. None of the backpay will go into effect until the government reopens, and as for when that will be? It's anyone's guess.

Though it's a step, it's not a solution. Senator Ben Cardin, who CNN reported sponsored the bill, summed this up on Twitter, saying that the legislation is "an important step toward providing our civil servants with some stability and hope," but that it "doesn't help pay the bills *now*." He added: "To do that, we MUST reopen the government. #EndTheShutdown."

Though it's pretty much common sense that shutting down portions of the government for extended periods of time — a period longer than any in history, for that matter — wouldn't necessarily be great for the country as a whole. Aside from the deterioration of national parks and loss of federal workers' paychecks, some estimates were arguing that the government's spending deficit was in the billions at this point, which could be positive.

However, economist Kevin Hassett told CNN that the White House "underestimated" the negative effects of the shutdown.

If the government workers don't go to work, then they reduce their output calculations accordingly. We made an early estimate right at the beginning of the crisis that was a little bit lower than the estimate you just cited and have been studying hard as this has gone on and have found that actually the damage is a little bit worse because of government contractors, something that was excluded from our first analysis.

The shutdown, which originally began as a stalemate because Congress won't pass a spending bill that includes the funding of President Trump's border wall between the U.S. and Mexico, currently has no end in sight.

It's also not reassuring that Trump has at once said that he is willing to allow it to go on for "months" if not longer, and that he doesn't even consider it a "shutdown" as much as a necessary strategy for ensuring the "safety" of the United States. “We won’t be opening until it’s solved,” AP reported the President said. “I don’t call it a shutdown. I call it doing what you have to do for the benefit and the safety of our country.”

Be that as it is, there are ongoing and — only intensifying — consequences for all those impacted by the shutdown. It's hard to say how much more devastating those could be if this continues to go on as it is. Unfortunately, neither party seems inclined to compromise, but at least there is a degree of progress in the fact that those currently not receiving paychecks will be reimbursed in the future.