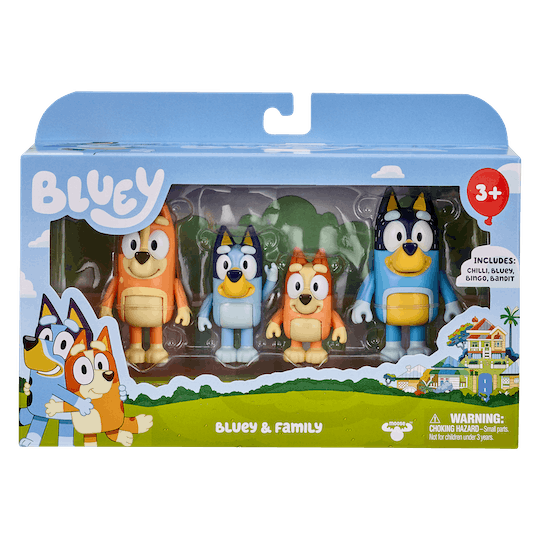 If you have small children, then you know all about Bluey. The incredibly popular Australian kids' show now on Disney Junior and Disney+ has taken America by storm, and if your kids are obsessed, you'll be thrilled to see the new Bluey toys at Target — they do not disappoint.

The line is as fun and funky as you would expect of the animated show about a family of Blue Heeler dogs, featuring plushes, multipacks of action figure style toys, a family playhouse, and Bluey and family's four-wheel drive vehicle. Rounding out the collection is a series of board and card games featuring cards large enough for little hands to manage. The collection will be available at Target starting in late June, and prices range from $8 to $40, making the line affordable to a great deal of families. You'll be able to find these toys at other major retailers starting August 1.

Suzy Raia, VP, Consumer Products and Business Development, BBC Studios said in a press conference, "Bluey has been winning over audiences everywhere, and we're so excited that kids and families in the U.S. will soon have the chance to 'play along' with Bluey, Bingo, Bandit, and Chilli beyond the screen." And parents are looking forward to something new and novel to keep their children occupied during the long, socially-distanced summer. Thanks, Bluey for really doing exhausted parents a solid.

Kids will love reenacting scenes from the now iconic show. Hopefully, that means that little American children will get the Australian version of the Peppa Pig effect, and start saying things like, "It's time for brekky" and "I love you, Mummy," because that would be unspeakably adorable. (Hands up if you tried to emulate the Crocodile Hunter accent as a kid in the '90s and 2000s, and failed absolutely horribly.)

The show is a great mixture of sweet family times, joking references gifted to the adults who are forced to watch hours upon hours of it, and the sort of life lessons that permeate these types of shows. Having the toys available to relive it gives kids a great starting point for their imaginative play. They know the characters, and they have ideas for scenes in their head that they can use as a foundation for play. And that's the whole goal of these sorts of toys. Take the discussion offline and off the television, and bring them into children's everyday lives so that they continue the learning. Or in this case, the accent.