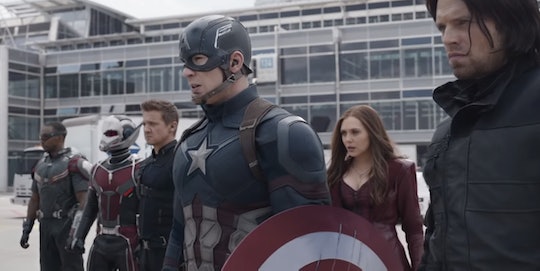 Step aside, Peyton and Cam — there's an even bigger name in town. During Sunday night's big Super Bowl 50 broadcast, sports buffs and nerds alike were treated to the debut of the new Captain America: Civil War trailer, and both groups were rightly freaking out for several reasons. Between the added sneak peeks and the shiny new footage of #TeamCap and #TeamIronMan facing off, Marvel fans everywhere had plenty of exciting things over which they could rejoice.

In typical Marvel style, of course, the comic behemoth gave viewers the opportunity to battle it out over social media, tweeting footage of the new trailer, along with shortcuts for fans to cast their support for either side. (Team Cap right here, because duh.) "United we stand," the company wrote. "Divided we fall." A harbinger of future catastrophe? Tell me you didn't get the chills just then, I dare you.

Set to a chorus of voices chanting the movie's aforementioned tagline, the new trailer featured the two sides battling it out in a flurry of explosions, smoke, and spectacular stunts, with one particularly intense moment between Tony Stark and Bucky Barnes, in which the latter fired a bullet in the direction of Stark's face at point blank range (by the way, that's "Iron Man" and "The Winter Soldier" respectively, for those of you who aren't dedicated Marvel groupies).

With so much happening in the Marvel Universe of late (hello, Ant Man and Deadpool, my one true love), the new Captain America: Civil War trailer was just the thing the fandom needed to keep itself busy between opening night showings.

Check it out below:

Anybody else excited for the movie?