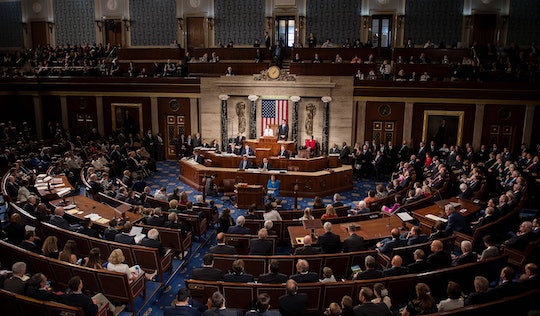 New Congress Is The Most Racially Diverse Ever

When it comes to the 115th Congress, which was sworn in on Tuesday, there's both good news and bad news when it comes to its diversity. This year's new Congress is the most racially diverse ever, but the number of women in Congress hasn't changed since last year. Overall, there are still only 104 women among the 525 politicians that make up the House of Representatives and the Senate. Despite the fact that women make up half of the United States' population, they continue to represent only 19.4 percent of Congress.

There are victories, even among the women of Congress. The number of women of color increased (to a record high of 38), and this year there were a higher number of incumbent female Congress members than ever before. However, the overall number of women has yet to rise, and that's a problem in several ways.

First of all, women lead differently than men do. According to CNN, female leaders are generally more compassionate and open, and they tend to use more inclusive negotiation tactics. Countries with higher numbers of female leaders (of which there are quite a few, by the way: 98 countries have a higher percentage of female Congress leaders than the United States does) direct resources to different areas, with changes made to parental leave, child care, and pay. According to USAID, countries where women make up more than 30 percent of their political system are more inclusive, fair, and democratic.

The fact that women's issues are largely decided by men should also be infuriating. Why, for instance, are abortion laws mainly dictated by men? "Why are we not making progress on campus sexual assault?" Illinois Congresswoman Cheri Bustos told Cosmopolitan last year. She continued:

Why are we not making more progress on sexual assault in the military? These are issues that are mostly female victims that we're talking about. Women can relate to this issue in a way that is very, very personal. I mean, can you imagine if we had a woman president, a woman Speaker of the House and if we picked up more seats in Congress with women members? Can you even imagine that those issues wouldn't make some headway?

On that same topic, I'm not only speaking about assault or reproductive rights. Everything counts as women's issues — from healthcare to education to transportation to foreign policy — because they're human issues, and our population is half female.

And the lack of representation in government doesn't only affect our current generation — it affects the next generation, as well. A study by the Women and Politics Institute found that women are less likely to hear, from anyone, that they should run for office, and they're less confident, less competitive, and less likely to believe they're qualified for the role. In areas where women are well-represented in politics and leadership roles, however, parents have higher ambitions for their daughters, and the gender gap in teenage education vanishes.

The 115th Congress is one of the United States' most diverse yet — but a lot more work is needed before Congress can claim to be truly representative of the entire country.