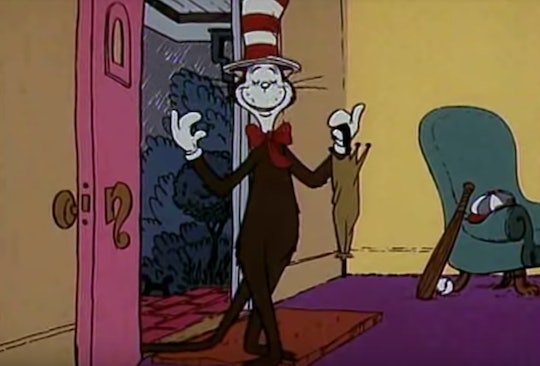 A Never-Before Released Dr. Seuss Book Is Coming This Fall & It Sounds SO Good

Dr. Seuss books are practically a staple on every young kid's book shelf, everywhere. From the charming illustrations, to the inventive characters, there is a reason why Dr. Seuss' stories have stuck with families for generations. And because of this, people should be delighted to know that there is a new Dr. Seuss book about the world of art called Dr. Seuss's Horse Museum and it is coming out soon.

Dr. Seuss (also known by his birth name, Theodor Geisel) died in 1991, according to USA Today. But, more than 25 years after his death, there is a new book written by the man himself headed to bookstores within this next year.

This new book, titled Dr. Seuss' Horse Museum will feature brand new drawings from the author, along with never-before-seen text and will definitely become a main stay on your kid's book shelf by this time next year. And the topic of this new book will teach kids about something they might have not appreciated before reading it — art.

Cathy Goldsmith, one of the book's publishers who worked with Seuss in his lifetime told Good Morning America that they are excited that he will finally be able to talk about this important subject.

"It is all about the creative process, how artists look at things, how they think about things, and how they show us what they see," Goldsmith told Good Morning America. "And this is something that I think Ted spent an awful time thinking about."

Although some people might be more familiar with Dr. Seuss' books, he was also an artist, not only illustrating his own stories (and coming up with the appearance for some of his most famous characters) but also created paintings and sculptures, according to Artsy. And in his new book, he'll have the opportunity to explain how he saw and created art, according to ABC News, which is an interesting look behind the man who would have been 115 years old on March 2.

This sounds like a fantastic concept for a book, especially since it has the opportunity to inspire a generation of new artists out there. If Seuss' picture books, The Cat In The Hat, could inspire kids out there to be silly and use their imagination, while The Grinch could inspire kindness and Christmas cheer in others, then Dr. Suess's Horse Museum could definitely inspire kids to make art.

And that is awesome.

It was Dr. Seuss's own art that inspired this new book to come out. After Seuss's death, a manuscript and "very rough sketches" were found for this book, according to ABC News. And thanks to illustrator Andrew Joyner, who was able to "complete [Seuss's] unfinished artwork," according to Penguin Random House, and the book was able to be finished.

But this isn't Seuss's first posthumous release. There have been more than five posthumous releases from him in the past 28 years, according Mashable. And this newest book will simply add to that collection. But it will be a little while before anyone can get their hands on the book.

Dr. Seuss's Horse Museum won't be out in stores until Sept. 3, 2019. But, in the mean time, people can order it on Amazon to ensure that it will be delivered right to their doorstep the second it becomes available.

No one will ever be able to replace Dr. Seuss, which is why this new book is going to be so special — his gift of art and cheeky stories to the world is the gift that keeps on giving.