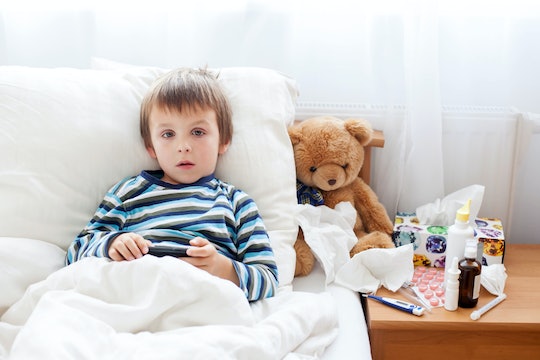 Ugh, flu season. Every year, the mere thought of their children contracting influenza sends fear straight into the hearts of parents across the nation. Many caregivers take preventative measures, making sure that all members of their family are vaccinated against the virus. Still, as health care providers remind us, the flu shot isn't a 100-percent guarantee. With this in mind, caregivers try to remain diligent about hand-washing, minimizing exposure to sick friends, etc. But the fact remains: No one is completely safe from influenza. So in the midst of a particularly nasty flu season, here's a bit of good news: According to ABC News, a drug that "kills" the flu in one day could be on its way. And it would be a game-changer for parents.

It's no secret that this flu season has been worse than most; the fact that 97 child deaths have been reported so far, according to USA Today, is a pretty scary statistic. And as TIME reported, the 2017-19 flu season has actually already made history, according to the Centers for Disease Control and Prevention (CDC). “This is the first year we had the entire continental U.S. be the same color on the graph, meaning there’s widespread activity in all of the continental U.S. at this point,” CDC Influenza Division Director Dr. Dan Jernigan said, according to TIME. “It is in a lot of places and causing a lot of flu.”

However, a new course of treatment for influenza could be on the horizon. That's because a new drug that reportedly kills the flu virus in just one day was just approved by Japan's Ministry of Health, USA Today reported. It's called Xofluza (the generic name is baloxavir marboxil,) and it could potentially hit shelves in Japan as early as May.

So what's so great about this new drug, you ask? Let's break it down, in comparison to treatment that's currently available. Depending on how far along an infected person is in the course of the virus, patients who test positive for influenza are generally prescribed Tamiflu or the generic oseltamivir — which usually shortens the amount of time symptoms stick around, according to ABC News. With Tamiflu, a person takes one daily dose over a span of five days.

Like Tamiflu, Xofluza shortens the duration of flu symptoms. On top of that, though, Xofluza also reportedly deactivates the flu virus within the human body as soon as 24 hours after a person takes it, ABC News reported. One pill and bam, done.

This is kind of a big deal, for anyone who has ever had influenza. (Or has taken care of a small human suffering from the flu.) Sure, the patient will have a similar experience with either drug, but the real difference here is the person would no longer be contagious after one day. This would, ideally, help to slow/prevent the spread of influenza as a whole.

Even though Xofluza is not yet available in the United States, the fact that it was approved in Japan is promising. In fact, the drug manufacturer that makes Tamiflu (Roche) is already working with Shionogi, the Japanese firm that makes Xofluza, and another company in trials in the United States. "We believe Shionogi’s innovative influenza compound, combined with Roche and Genentech’s experience and expertise in influenza, will ideally position us to address the unmet need of influenza patients," the company told ABC News. If Xofluz is approved this year for use in the United States, we could possibly see it offered during the 2018-19 flu season.

Two-thirds of my children have had Influenza A so far this flu season, even though all three of them were vaccinated this past fall. I mean, I'm still glad they did get the flu shot — because most likely, they would have been sicker for longer had they been not been vaccinated. Still, it was no walk in the park. My normally energetic toddler and preschooler were both feverish, achy, couch-ridden, and had chills for several days. We were essentially quarantined at home for a week. But hey, at least (by some miracle) neither my husband nor I ended up with the flu this time around.

Honestly, I would have loved to have something like Xofluza to further minimize the spreading. Who knows? Maybe it could have prevented one of my daughters from suffering through Influenza A. It'll be interesting to see how the U.S. trials pan out — and whether Xofluza be available in the United States by the time next flu season rolls around.