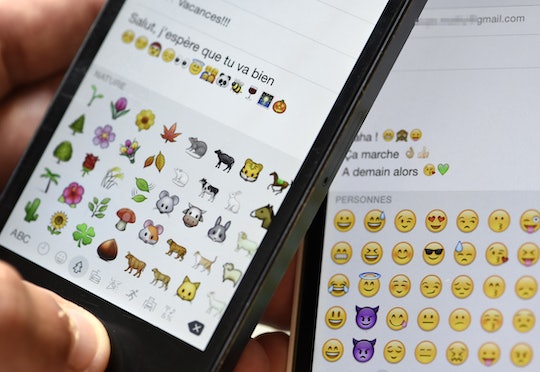 New Emoji Will Include A Pregnant Woman & A Face Palm, So Moms Should Be All Set

The wait has finally ended. It looks like moms might be getting a new set of emoji tailor-made for our everyday communications. The new emoji will include a pregnant woman and a whole range of symbols that will help shorthand texts from your first trimester well into the teen years.

Apparently, there's a company called Unicode that's in charge of approving all the new emoji, and, in advance of the release of an updated version of its code, it's about to approve a pretty extensive list of 72 new emoji that everyday objects like shopping carts, kiwis, bats, and canoes. But, checking out the new list, you can't help but catch all the mom moments included in the characters. Many of these had to have been developed by, and for, moms.

The pregnant lady's an easy clue, but there are plenty more mom-mojis on the list.

For instance, the new face emojis include a face rolling around on the floor laughing (ROFL, get it?), cowboy face, clown face, and even a lying face with a nose growing out like Pinocchio. Hello, teen years! There's also a drooling face, nauseated face, and a face sneezing, which will totally come in handy during allergy season.

My favorite is the face palm, because most moms I know could use that one for most conversations. And my second fave would be what appears to be a nice, stiff drink, because that's just the perfect way to let your friends know exactly what time it is.

There's also one that could actually help keep your kids safer, and that's the peanut. If you've got a kid with a dangerous allergy, it might be nice to send a picture, just so there's no confusion about diet restrictions. Does peanut auto-correct?

Anyone can propose a new emoji, so Unicode also included some of the proposals submitted for the new emoji characters, which are strangely interesting, like this one for the new food emoji that makes the argument for the addition of kiwifruit and squid. And, according to the submission guidelines, the emoji has to be something that you can prove people actually want to use before it will be considered by Unicode, so it's probably not just me who's excited about texting an owl or pita pocket. But before you get all geared up to send your morning sick friend a nauseated face like I was, you'll have to wait a bit longer for the new characters to make it to your keyboard. Unicode won't approve the final list of emoji until June 21, according to Tech Crunch.