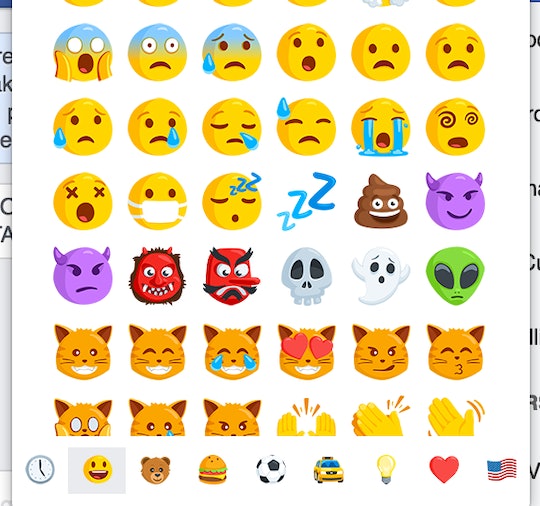 Forget pictures, an emoji is worth 1,000 words, and they're able to clearly get a message across in just one tiny image. Now, thanks to a highly anticipated update over at Facebook, that message just to a whole lot more diverse. After it's most recent update, the new Facebook emojis prove that there's absolutely no need for speaking anymore... they're everything any social media addict could ever have asked for and then some.

Facebook had previously announced that it would be releasing more than 100 new and redesigned emojis on Thursday morning for the Facebook messenger platform. Unfortunately (or fortunately), the newly designed emojis are Facebook-exclusive, meaning the emoji keyboard app on your iPhone or Android won't be affected by the change. In other words, the cute little emojis that decorate your texts and contact information will look the same as they always have — the only place you'll see the change will be on Facebook.

The new Facebook emojis are a little different — your eyes aren't fooling you. The Facebook emojis have a flat, almost hand drawn and cartoonish feel compared to the 2-D emojis in your phone. These new emojis on Facebook include all of the favorite and unique emojis you've grown to love, like the purple devils and the cute little cat faces — except with Facebook's adorable take on them:

For the first time ever, there will be an option for a red headed emoji (shout out to all of the red headed readers like myself who have been waiting for this day to come) and women featured in new, diverse roles. The new Facebook emojis will feature a woman as a police officer, a pedestrian, and a surfer among others for the first time ever. "We're diversifying genders to create a more balanced mix that's more representative of our world," Facebook wrote in a post about the emojis.

For the first time ever on Facebook there will be no black boxes were emojis are supposed to be. Therefore there will be less miscommunication when it comes to using emojis in statuses or conversation. This is because the new emoji keyboard on Facebook is universal, no matter what make or model of phone you have.

The new emojis, according to Facebook, are also more representative the general population as well — hence the female cop and the option for red headed emojis — which were lacking in the app's original design. This representation also includes the ability to set a default skin tone in Facebook's emojis or switch between skin tones at any time.

While the new emojis aren't a complete representation of women and the world we live in, they're a lot better than some of the current emojis that reside on iPhone and Android phones everywhere. The new Facebook emojis are a step in the right direction of inclusion and representation of diverse hair colors, skin tones, and professions. Plus... so cute, right?