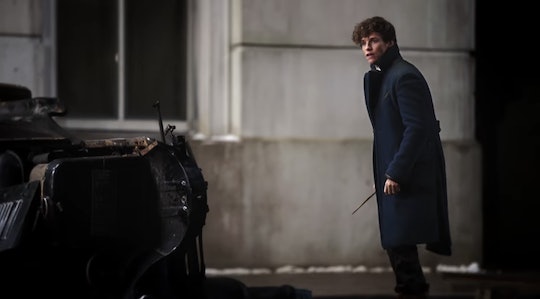 Heads up, Harry Potter fans. The newest video peek from J.K. Rowling's latest film, a Fantastic Beasts and Where to Find Them featurette, debuted this weekend, and it's revealed a side of the wizarding world that had previously been neglected in the popular book series. Although Fantastic Beasts isn't set to premiere until November this year, the new feature tailer has given dedicated fans something to chew on in the meantime.

More Like This
Everything You Need To Know About The Proud Family Reboot Coming To Disney+
Lisa Kudrow’s Son Used To Say "Mommy!" When He Saw Jennifer Aniston On TV
Naomi Campbell Reveals She’s A First-Time Mom
15 Of JAY-Z’s Best Quotes On Parenting

While the Harry Potter series itself was situated in the UK, little to no attention was ever dedicated to the witches and wizards outside of Britain and Ireland. In Fantastic Beasts, that will all change.

The movie follows the story of British magizoologist (that's a wizard zoologist, for all you Muggles out there) Newt Scamander, played by Eddie Redmayne, who must fend off both American wizarding authorities and anti-magic organizations alike while tracking down an array of magical creatures loose in 1920s New York. Along the way, Newt crosses paths with Americans Porpentina (or "Tina"), Queenie, Jacob, Creedance, and American Auror Percival Graves.

So what are American wizards and witches like? According to Rowling, the crew of New York-based magical folk in Fantastic Beasts aren't too different from their British counterparts, with one exception. "Indigenous magic was important in the founding of the school [at which the American characters in the movie previously received their educations]," Rowling tweeted in response to a fan question last June. "[But] if I say which tribes, the location [will be] revealed."

The latest Fantastic Beasts featurette is a nearly three-minute long clip that takes viewers behind the scenes of the highly-anticipated film and gives them a taste of at least a few new cast interviews, including sit-downs with Redmayne and the films leading actors, Katherine Waterston, Alison Sudol, Dan Vogler. The clip also features fresh teasers of Colin Farrell in costume as Graves, the wizard who's been tasked with tracking down Newt and bringing him to justice.

"It's incredibly exciting," director David Yates explained in the new featurette, which according to IGN was released this weekend at "A Celebration of Harry Potter 2016", the Harry Potter fan event hosted at Universal Studios' Wizarding World of Harry Potter resort in Orlando, Florida. "We're working directly with J.K. — it's her first screenplay." Added Harry Potter alum and producer David Heyman, "It's [a] vivid, lively, beautiful world that Jo has created."

Fantastic Beasts will open nationwide on Nov. 18 this year, and will serve as the first installment in the Warner Bros. trilogy. Crack open your copy of Care of Magical Creatures and start brushing up on your spell-work, fellow Potterheads — because if the latest Fantastic Beasts featurette is any indication, you're in for a wild ride.