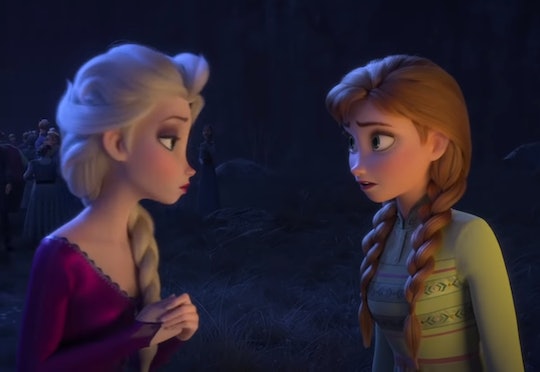 The wait for Frozen 2 is almost over, and Disney is giving fans much more than a glimpse of the new film today with a full-length feature trailer. And the newest Frozen 2 trailer looks incredible, giving a peek at magic and mortal danger abound for our favorite sisters, Anna and Elsa, as they seek answers from the unexplored enchanted forest.

Disney has been pretty secretive about the film’s marketing until now, but this trailer gives us a complete overview of the upcoming story and it is full of action, magic, and what looks to be a strong story. The clip launches with a flashback to Elsa and Anna as little girls, hearing a bedtime story from their father about the enchanted forest. “It was a magical place, but something went wrong,” he explains. “Since then, no one can get in, or out.”

Flash forward to adulthood and something is plaguing Else — a voice that has her a bit out of sorts. She realized she has to venture to the forest to seek the answer to what’s going on, and there is no way Anna is letting her sister go alone. "Excuse me I climbed the North Mountain, survived a frozen heart, and saved you from my ex-boyfriend so, you know, I’m coming," she argues.

Back during the D23 Expo in August, Disney announced that Frozen 2 would answer two big questions, according to ScreenRant. The first would be what happened to Elsa and Anna's parents. The second is what the source of Elsa's powers is. And those powers will again be central to the plot, only this time Elsa isn't running from them. Rather, the implication is that they may be stronger than even she understands. "Magic is very alluring," Anna is told. "Without you she may lose herself to it."

Rock monsters, the forces of nature, and their own desires look like a few of the things that the people of Arendelle will have to face to keep their kingdom safe.

The film once again stars Kristen Bell and Idina Menzel as Anna and Elsa. Jonathan Groff reprises his role as Kristoff alongside Josh Gad as Olaf. Joining the cast this time are Evan Rachel Wood as Anna and Elsa's mother Iduna, and Sterling K. Brown as Lt. Matthias, both trapped inside the forest.

The franchise seems to be growing along with its fans, as ScreenRant noted, bringing more complex themes like destiny and choice into its second outing. And this trailer makes it appear like much more than just an opportunity for Disney to make another blockbuster movie; it could be one of those films that lives up to the tough task of matching the quality of its predecessor.

Needless to say, fans are already set to line up and throw their money at the new film. And Disney's post of the trailer to Twitter is getting overwhelmingly positive response.

It won't be too much longer before you can catch all the new and exciting action on the big screen. Look for Frozen 2 in theaters on Nov. 22.