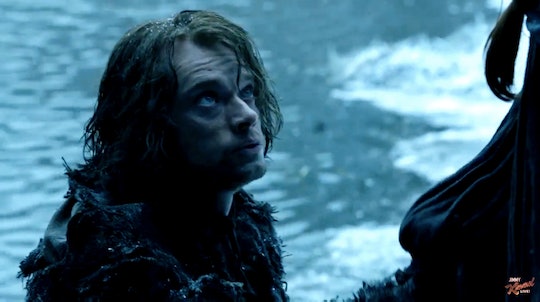 It looks like in the upcoming season of Game of Thrones, everything is going to get a whole lot worse for everyone. But would you expect anything less? In most of the trailers and clips released so far, things just look super miserable all around, which means if you love the series it's going to be everything you want. In the newest Game of Thrones clip, it's Sansa and Theon who have been dealt a raw deal, as they trudge through a frozen river to get out of Winterfell and away from her husband, the abusive Ramsay Bolton. And it looks so very uncomfortable. Can't someone get Sansa a pair of rain boots or something? Or a blanket, even?

In true Thrones fashion, the only way to get to wherever they're headed is right through the slushy river. On Tuesday night, Iwan Rheon, Michael McElhatton, and Alfie Allen premiered the clip on The Jimmy Kimmel Show and pretty much agreed that, yes, things are definitely going to get harder before they get easier. The clip in question is from the premiere episode of Game of Thrones Season 6, which airs April 24 on HBO, so all will be revealed pretty soon.

After watching this week's new clip, fans are likely just bracing themselves and hoping Sansa and Theon (or Reek) will be able to cross the icy river without freezing to death, but knowing how creators David Benioff and D.B. Weiss likes to pace action, the future looks pretty dire and drawn out for the duo. No one said escape should be easy. But does it have to be so terrible?

In a recent interview with ABC, Allen said that it takes a lot to prepare for the torture that seems to know no end on the series. “I mean, I guess to go to those really dark places, you have to kind of keep it light in between," he said. (Talk about mind games.)

In the same interview, Iwan Rheon added that nothing good is going to happen anytime soon for his character Ramsay either, and his bad behavior will only get worse he said. "Some more horrific behavior and real disgraceful stuff,” he said. “You wouldn't want to take me home to meet your mother.”

While Game of Thrones might shock or make you feel like life is an endless series of hardships (which, it can be), it never disappoints in hitting all those emotional low points — especially if you're still waiting on Jon Snow to somehow not be dead, since the creators recently confirmed that he is not coming back again. Or is he?

Season 6, with all its hardship, could reasonably contain a few spoilery surprises. In an interview with Variety recently, creators Benioff and Weiss joked that the showrunners disliked Kit Harington, who plays Snow, so much that they wouldn't even bother attempting that kind of fake-death plot twist. "People have to understand, though, that at a certain point Kit Harington became such a monster, that writing him off the show was imperative to our sanity and the well-being of the crew — the safety of the crew — because he’s, frankly, abusive," Benioff quipped mockingly. Weiss joked, "There's a certain level of violence, physical and mental, in a human being that you just can't abide by anymore.

So does their sarcasm mean there's hope for character? Or was he describing that feeling you get after binge watching even just two episodes. Fans won't know until they tune in, which seems to be the point of all this teasing. Still — whether or not Snow is really dead is nothing to Sansa's escape into that river, nor does it have much impact on the hellish fates of the rest of the characters this season. Cancel your plans this Sunday — Game of Thrones is coming.