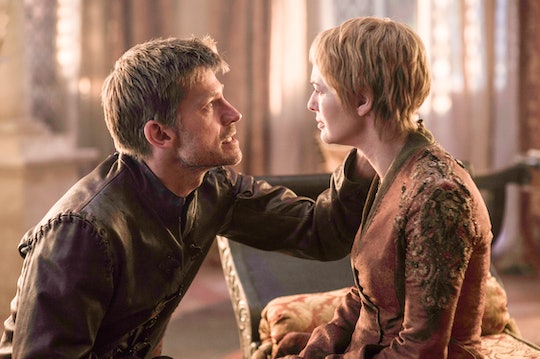 Hold onto your butts, everyone — a new round of photos from Game of Thrones were released on Thursday, and from the looks of it, season six is bound to be a crazy one. It's not as if anyone didn't expect more insanity in the upcoming season, of course. When we last left Westeros & Co™, the gang was in total shambles: Reek (that's Theon to you) and Sansa had leapt to their half-deaths, Arya had faced serious punishment for breaking the rules over at the House of Black and White, and Cersei looked ready to cut a b*tch for what can only be described as the worst walk of shame ever.

In the new photos, released by HBO this week to plenty of rabid excitement, it seems that things are only going to improve marginally for the Game of Thrones crew... and that includes Jon Snow who was, you know, bleedin' out like a champ in the snow the last time we saw him.

"It was awful, it was really awful — everyone was so sad about [Jon's death]," cast member Maisie Williams said, of last season's big death scene, during an interview with The Sunday Express last month. Williams explained that while she wasn't at liberty to divulge much about Jon and the upcoming season, fans could look forward to "a great twist." (That had better mean we get more Kit Harington, Williams, don't let me down.)

Although the new photos don't exactly tell the whole story, they do give us a few important hints at some of the things that will likely be addressed in the season six premiere on April 24.

For one thing, we now know that that epic leap Sansa and Theon took from Winterfell's high walls didn't kill them (hooray). We also know that Ramsay Bolton is alive and well, and likely to make chase to re-capture his beleagured bride, if history is any indication (ugh).

As for Daenerys, we last saw her nope-ing out of the Daznak's fighting arena at Meereen on the back of her dragon, Drogon like the queen that she is, before being dropped off at a rest-stop in the middle of nowhere and subsequently being surrounded by a bunch of Dothraki bloodriders. In season six, it looks like Daenerys is back and a little bit pissed that her pet dragon left her alone to be captured and/or unnecessarily rescued. (Way to drop the ball, Drogon.)

Daenerys wasn't the only one whose fate was left up in the air at the end of season five; In one newly released photo, it seems Queen Margaery Tyrell too is in a bit of a bind, having last been seen sitting on the dirty floor of a prison cell, after being imprisoned by Cersei and her ilk. In the new photo, which is taken from behind, a familiar strawberry blonde head is seen kneeling before one of the prison matrons/nuns, with the cell door left ajar — which could mean that Margaery is about to make a hasty, albeit ill-advised, escape.

It wouldn't be all that surprising either: In January, actress Natalie Dormer, who plays Margaery in the series, dropped a few spoilery clues as to her character's fate in the new season. "In season six, you're really going to see Margaery in a predicament where she genuinely is fearful, and she absolutely has no idea how to get herself out of it," Dormer told Vulture in an interview. "... She's out of her depth, finally, and losing her grip a bit."

And what of the dashing Jaime Lannister? It appears that the former King's Guardsman and Hand (no pun intended) has a lot of soul-searching to do, now that Cersei is busy with her own problems. At the ends of season five, Jaime's niece (and biological daughter) Myrcella Baratheon was murdered through poisoning by Ellaria Sand and her troupe of adorable assassins, as revenge for the killing of Prince Oberyn Martell (Ellaria's bae and husband in all but name). With Jaime left to grieve the loss of his daughter, the new season seems to hint that the ever-evolving knight will be forced to confront the sticky mess head on, without the help of his sister.

Sansa isn't the only Stark whose future was hinted at on Thursday: In the new HBO release, photos of Arya and Bran gave fans sneak peeks at what's likely in their future, once season six premieres in a few short months. From the looks of it, Arya is left completely blinded from her punishment via the House of Black and White — the fact that the newest stills show her sitting on the street with a bowl in her lap and rags on her back does nothing to ease Arya fans' fears either.

In contrast Bran, who's pictured standing upright (and totally grown up... awww) in a dream sequence, seems to be well on his way to figuring out all this Three-Eyed Raven nonsense. I'm still not sure what it all means, but the new photos give fans a hint that that confusion won't last for much longer.

If the latest round of Game of Thrones photos has done nothing else, it's only served to convince everyone that the complicated plot twists of season five are bound to get even more tangled in the upcoming season. And as for you, Jon Snow? You'd better have a good excuse for not showing up.