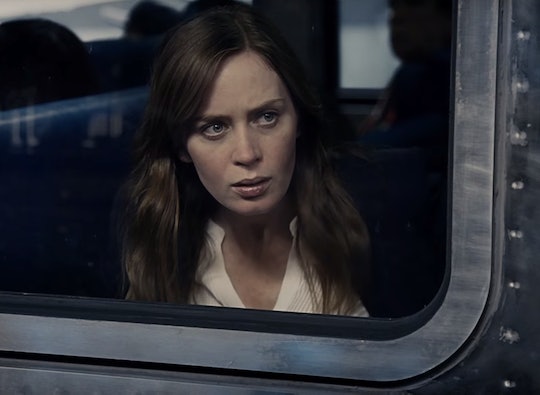 Since Paula Hawkins' debut thriller The Girl on the Train began topping bestseller lists upon its release in January 2015, The New York Times has likened it to Gillian Flynn's mind-blowing Gone Girl. NPR hailed the story as "indisputably Hitchcockian and labeled Hawkins' writing as "cinematic, in the best possible way." Couple that with the fact that the novel features jealousy, murder, alcoholism, a very unreliable narrator, voyeurism, unfaithful spouses, and enough mystery to keep a reader up all night, the announcement that The Girl on the Train will soon be a major motion picture is really no surprise. This week, the new Girl on the Train trailer debuted — and much to fans' delight, it was super intense.

Just like the missing-persons-case-turned-murder-investigation that drives the plot, the Girl on the Train trailer already has everyone talking. Emily Blunt stars as Rachel Watson, a recently unemployed divorcee who develops an obsession with a couple she clandestinely watches from the train during her daily faux-commute to New York (in the book, she's headed to London). Costars include Haley Bennett, Luke Evans, Rebecca Ferguson, and Justin Theroux. The film will premiere in theaters Oct. 7.

Set to the soundtrack of Kanye West's "Heartless," the heart-stopping teaser trailer shows violence, confusion, and suspicion cast on the main character, Rachel, who may or may not be a murder suspect.

Rachel also can't seem to remember what she was doing during the crucial hours during which one of the objects of her obsession went missing. It's all a lot to process, and the internet is appropriately intrigued.

First, those who loved the book are psyched about a film adaptation:

And those who haven't read it yet plan to do so, stat:

Also, it's clear that Emily Blunt is about to gift us all with quite the performance:

Some wish that the movie version were less American and more British, though:

It's safe to say from the trailer that Rachel Watson's commute may be slightly more of a struggle than yours. After all, watching the seemingly perfect couple she envies (and her inability to mind her own business, in any sense of the phrase) lands her under suspicion for murder.

But during an appearance on The Today Show, Blunt said the idea of voyeurism is what people gravitated to in the book. "... That idea of obsessing about people's lives ... I think we've all done that, it's a universal thing," she said.

If the movie is anywhere near as gripping as the book (and judging by the trailer, it's going to be), another "universal thing" will be hordes of people rushing to movie theaters this October. Whether they'll take the train to get there remains to be seen.