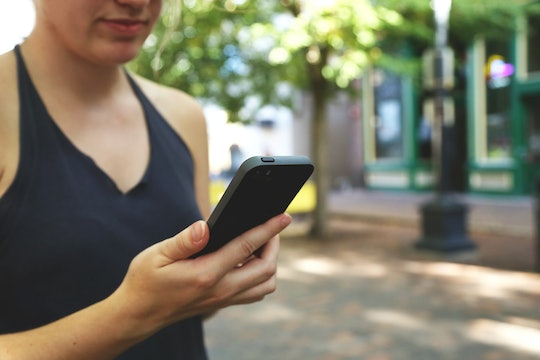 Before you start panicking: Don't freak out. This really isn't that bad. And, as with most things, knowledge can equip you with the tools you need to save yourself. Sure, the new Instagram screenshot notifications sound like a total nightmare, throwing anonymity out the window in favor of transparency, but there are plenty of precautions you can take to make sure that you-know-who doesn't screenshot you-know-what. So relax and don't worry; This won't ruin your life. (Probably.)

Though I'd love to drag this out and make you sweat a little more, I'll go ahead and cut to the chase: Screenshot notifications apply to picture DMs only, not other people's posted photos. So no, screencapping Emily Ratajowski's butt pic won't send her a notification (sadly). Screencapping the chat in a direct message from your friends about it also won't incur a notification, so if someone messages you something totally weird and you just have to save it for your records, feel free to do so with no repercussions.

In less specific terms, when someone sends you a photo via Instagram direct message (the Snapchat-like disappearing photo messages), and you screenshot that photo, they'll know. And it'll look like this in their messages:

So, quite honestly, Instagram is just like Snapchat in this regard. Snapchat tells the sender if a recipient takes a screenshot of their disappearing message, which might even discourage people from sending Snaps or DMs altogether. But these screenshots serve a definite purpose. Maybe they're there to, I don't know, protect the senders of sensitive Snap material? If you send somebody a photo meant for their eyes only, and they in turn save that photo, your photo's a lot less secure than it was before — it's likely that your photo is saved in the Cloud now. Even worse, it can be sent to others. If your Instagram DMs are intimate, this notification actually could be some kind of godsend for you; You can call people out for saving things that weren't meant to be saved.

Some very sneaky Instagram users claim to have found a workaround to DM screenshots, starting by turning your phone on airplane mode to prevent notifications from being sent. It seems like a lot of extra effort, but if you've just got to have it, this hack might work out for you. Still, do your best to be courteous; Screenshot that of others that you'd have them screenshot of you.

Be wary, my friends, but don't be afraid. DM to your heart's content, and even screenshot if you must — just know that the sender will be notified. For now, chats and Instagram posts are fair game and notification-free, but it might only be a matter of time until that privilege is lost, too.