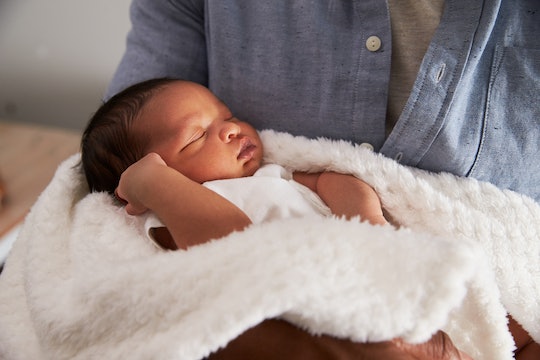 This State Just Added A Gener-Neutral Option To Birth Certificates, & It's Going To Effect Very Soon

Progress looks different for everyone, but for many people struggling in a society that is attached to binaries — particularly when it comes to sex and gender — having legal forms changed to reflect alternative options is pretty significant. New Jersey added gender-neutral options to birth certificates, and it's a pretty big win overall.

As of this week, New Jersey will be the fourth state in the continental United States to have a sex alternative on birth certificates. NBC reported that the law will officially go into effect on Friday, Feb. 8, with new paperwork featuring a "female, male, or undesignated/nonbinary" option.

This could apply to families for different reasons. First, babies that are born intersex can be given time to determine what they most identify with, and if medical intervention is going to be an option for them, or not. Otherwise, families who want to raise their children outside of the binary can opt for the selection to do the same.

The ruling is called the Babs Siperstein Law, and is named for the first transgender individual to become a member of the DNC. Siperstein is also a lifelong New Jersey resident, hence the state's decision to pass the law. Sipertein passed away on Sunday, InsiderNJ.com reported.

"Today is an important day for New Jersey as we continue to strive toward equality for all of our residents, regardless of sex or gender expression," governor Phil Murphy, who signed the new legislation, said upon signing it, according to Scary Mommy. "Allowing vital records to match gender identity is an important step forward that will allow transgender individuals to control the disclosure of their transgender status."

Indeed it is, and others would agree that it's a big step for inclusion, as well as a broader way of perceiving sex and gender as a whole. Amanda Babine, the director of policy and programs at the New York Transgender Advocacy Group, agreed: "Having a gender-neutral option will now give thousands of people in the state of New Jersey the power to self-identify," she said, according to NBC News. "We find this choice to determine their own identity leads to an increase in well-being for the individual and a push towards creating more inclusive communities."

As for Siperstein herself, it's clear that the timing of the bill's passing will serve as a homage to her life, as well as the contributions she made.

"Babs was a towering figure in the LGBTQ community who worked tirelessly to advance the rights of transgender people over the last two decades," Christian Fuscarino, the executive director of Garden State Equality, said of Siperstein, InsiderNJ.com reported, adding:

She was an architect of our movement, pioneering critical civil rights legislation here in New Jersey and, as the first openly transgender member of the Democratic National Committee, throughout our nation. With Babs, we had an LGBTQ icon — among the likes of Harvey Milk, Sylvia Rivera, and Bayard Rustin — born and raised right here in the Garden State. With the Babs Siperstein Law in effect now, every transgender Jerseyan who updates their birth certificate will be reminded of Babs and her courage. Babs' work has touched countless lives and will continue to do so, and we will ensure her legacy is remembered for generations to come.

It's clear that Siperstein's impact will be felt for many, many years to come, as her name serves as a reminder of why it's so important to make space for non-conforming and non-binary individuals in our society. No, it may not affect you or you family, but for those whom identification and legitimacy is a serious issue, it's a big and very important step.