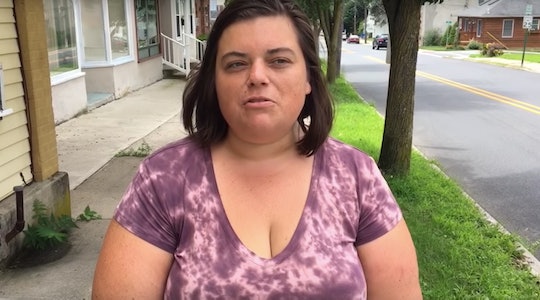 It's no secret that we have a long way to go when it comes to normalizing breastfeeding. Over the past couple of years, the movement to regard breastfeeding as natural, normal, and a totally acceptable thing to do in public has taken off, largely because women are tired of having to be so inconvenienced every time their baby is hungry. Not only that, but there's a fundamental misunderstanding when it comes to the purpose of breasts, which is not to sexually tempt all those who walk by one, but to, uh, feed a kid. That's why there's so much outrage that a New Jersey official called the cops on a woman legally breastfeeding in a park.

People reported that Michelle Ayala was feeding her 2-year-old daughter at Franklin Pond Beach on July 31 when an official from the park's recreation committee asked her to cover up. Ayala told NBC 4: “She said: ‘I see what you’re doing there, do you think you can do that somewhere else?’ And before she finished, I said, ‘Legally, I’m allowed to nurse wherever I am.'" And that's true, she is. Later, she explained that another official from the same committee approached her to apologize: “He said, I support you completely. Thank you for your time, thank you for your patience. I know this is silly, these are your rights and are you okay?'”

The Bump reported that when it comes to federal and state laws regarding breastfeeding, all 50 states have some kind of protection for moms who want to nurse in public, though there are variables. Breastfeeding in public, in particular, is governed by state ordinances. The magazine explained:

When it comes to breastfeeding in public, women’s breastfeeding rights are determined at the state level. But the federal government does have a pumping at work law on the books. Thanks to the Patient Protection and Affordable Care Act, which was signed by President Obama in 2010, women have the legal right to pump at work.

As Ayala said, New Jersey does not have any laws preventing women from nursing in public. According to the New Jersey Breastfeeding Coalition, this is under N.J.S.A. 26:4B-4, which says: "Notwithstanding any provision of law to the contrary, a mother shall be entitled to breastfeed her baby in any location of a place of public accommodation, resort or amusement wherein the mother is otherwise permitted." The coalition explained further:

It comes as no small irony that all of this went down just days before World Breastfeeding Week, which, according to Mother.ly, took place between August 1-August 7. As the movement picks up, celebrities and public figures have also been more transparent about the need to transform the way we think about nursing mothers.

An issue it still is, but momentum is building toward a more rational, accepting society.