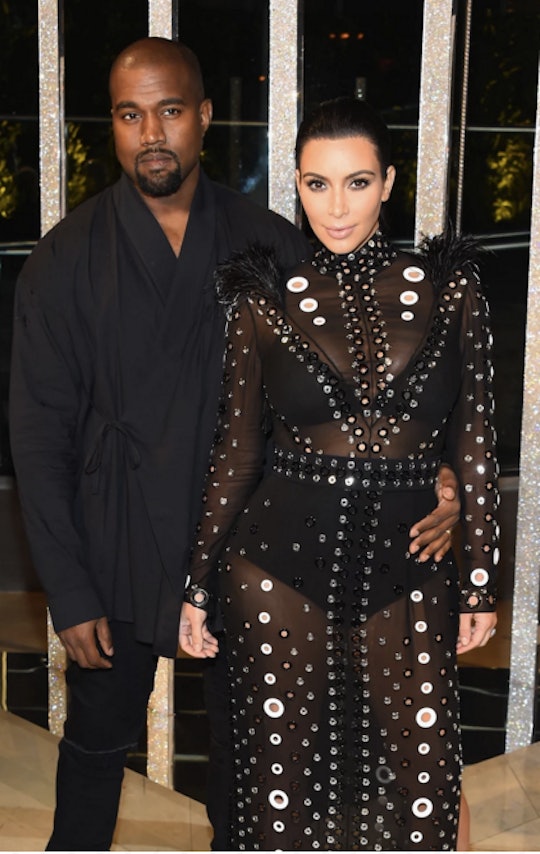 Yeezy wants you to have a rockin' New Year's Eve. And proving that he always gets his way, Kanye West's new song "FACTS," a track that's about, well, sneakers, and how dope his are. I guess that's his way of telling y'all to stomp in the New Year? As we all know by now, 2015 was the year West debuted two collections for Adidas, his ready-to-wear line, "Yeezy." In the song "FACTS," the rapper brags about his accomplishments in the fashion world, and even uses it as a way to ask for a bigger budget: "Tell Adidas we need a mil in production." Such a classier way to ask for a bigger budget than an email.

And courting controversy as always, Kanye disses Nike: "If Nike ain't have Drizzy, man they wouldn't have nothin'." Quite the bold move! Lyrically, Yeezy is jumping over Nike's Jumpman (you know, the Air Jordan kix, which happen to be one of the most popular selling shoes, like, ever.) But seriously, I think "FACTS" is Kanye's way of speaking back to his critics and defending just how much he wants to be taken seriously as a fashion designer.

Doing PR for the rapper's last minute release was none other than wife Kim Kardashian who initially made the announcement of an upcoming new song on Twitter:

The new dad, fashion mogul, producer, and rapper has been hard at work on his new album "Swish," which according to early buzz, is nothing short of phenomenal. The much awaited follow-up to 2013's "Yeezus" (which only garnered two Grammy nominations; West has a career total of 53 Grammy nods) is said to be Kanye's masterpiece. So it's no wonder the perfectionist performer is taking his time to make sure every note is on fleek. Speaking to Vanity Fair, West said "Swish" was like a "two-year painting."

"FACTS" gives shout outs to Kim and her famous curves, as West raps, he likes his "b*tches extra thick," and Kris Jenner, who West refers to as his "baby mama's mama," in addition to his platinum-selling sneakers for Adidas. I'd imagine Kim has been dancing to "FACTS" with Nori and baby Saint, all decked out in his shoes. Now the rest of the word gets to hear the track, just as bottles of champagne are popped and confetti hits dance floors of clubs and living rooms alike, all around the world.

This is history repeating itself: If you remember last NYE, Kanye released "Only One" with only minutes left in 2014. I guess he likes to go out with a bang.

Kim's promotional move worked as fans responded to her tease by hitting Twitter to joke about Kanye's perfectionist tendencies that keeping him from releasing new music.

I just have to note, even though the bad blood is waaay over, West's release comes the same night as does the drop of Taylor Swift's "Out of the Woods" video. Oh, Kanye, I gotta love you for making the statement, "This year is mine. I'm so owning 2016."