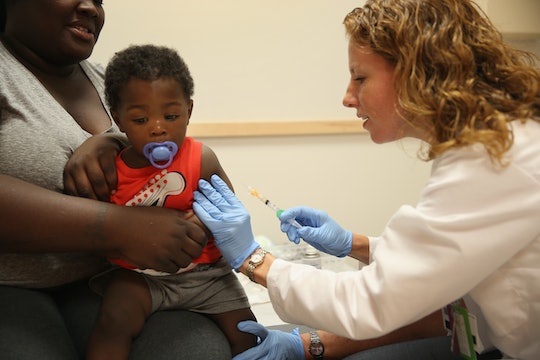 This year has brought the greatest number of reported cases of measles since it was declared eliminated from the United States in 2000, according to the U.S. Centers for Disease Control and Prevention (CDC). Amid this concerning outbreak, a new law is ending religious exemptions for childhood vaccines in New York.

New York Gov. Andrew Cuomo signed a new law on Thursday, making it a requirement for schoolchildren in the state to be vaccinated to attend school, unless they qualify for a medical exemption. "The science is crystal clear: Vaccines are safe, effective and the best way to keep our children safe. This administration has taken aggressive action to contain the measles outbreak, but given its scale, additional steps are needed to end this public health crisis," Cuomo said in a statement.

He continued, "While I understand and respect freedom of religion, our first job is to protect the public health, and by signing this measure into law, we will help prevent further transmissions and stop this outbreak right in its tracks."

The 2019 measles outbreak has continued to grow throughout the past six months in 28 different states, according to the CDC. In New York City alone, there have been more than 500 reported cases of measles since September, according to the New York City Department of Health. To put this into perspective, as of April, the outbreak across the state was so widespread that it accounted for 82 percent of measles cases nationwide, according to NBC New York. Ultimately, this new law aims to shrink these numbers.

While all 50 states currently have laws requiring students to have specific vaccinations, some states do allow for religious or philosophical exemptions, allowing parents to opt out of vaccinations if it contradicts with their religious beliefs or their moral and personal beliefs, according to National Conference of State Legislatures. There are currently a small minority of states that do not allow for religious exemptions, according to CNN, which includes California, Mississippi, Maine, West Virginia, and now, New York.

This new law comes on the heels of the spread of measles among religious communities in New York. These cases are largely occurring in unvaccinated or under-vaccinated communities of Orthodox Jews, according to Vox, who reportedly contacted measles after traveling to Israel and coming back to the United States.

After California removed religious exemptions in 2015, vaccination rates went up, according to the American Academy of Family Physicians, with the immunization rates for children entering kindergarten reaching an all time high three years later.

Though laws like the one just passed in New York are controversial and will likely draw backlash, as the measles outbreak continues to rise, it's clear public health officials feel the need to take action to halt the spread of preventable diseases.