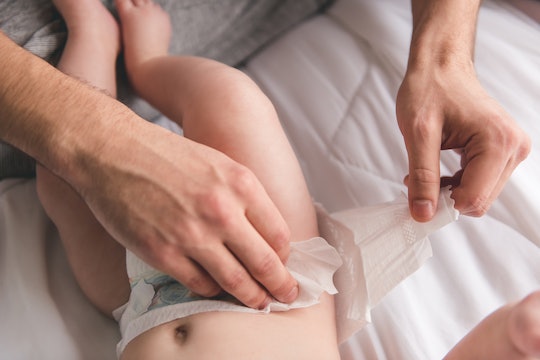 Gone are the days of dads having to change their babies' diapers in their laps or on the bathroom floors — well, in one state, anyway. A new law requires diaper changing tables in men's public restrooms in New York thanks to the valiant efforts of the state's governor. The changing table law is a part of the state's 2018 Women's Agenda and is a step in the right direction for equal parenting efforts everywhere.

As People reported, New York Gov. Andrew M. Cuomo announced in April that the state was set to require changing stations in all public buildings. The move comes as a part of New York's 2018 Women's Agenda and aims to provide "equal access to diaper changing stations," in all new or recently renovated buildings across the state, according to the governor's office. Cuomo stated that equality is paramount to his position. “New York proudly leads the nation in fighting for the rights of working parents," he said. "And by ensuring access to these amenities, we will help ensure all New Yorkers can give their children the care they need at this critical stage of their lives."

Additionally, the law requires that changing tables be available to "both men and women" with a minimum of "one changing table accessible to both genders per publicly-accessible floor," according to the statement. And to further help parents care for their children, “Building owners or managers must post clear signs directing the public to the location of the nearest available changing table.”

Along with details about the new law, the governor's statement includes information on the effects of not providing parents with changing tables. "This means that parents and caregivers of young children often struggle to find a safe, sanitary place to change their child's diaper," the governor said. And when tables are available, they tend to be located in women's restrooms. Dads are therefore forced to change diapers in unsafe or unsanitary places, and sometimes delay diaper changes all together.

The New York law builds upon President Barack Obama's 2016 Bathrooms Accessible in Every Situation Act, or the BABIES Act, which requires diaper-changing tables in all federal building restrooms, as CNN reported. The BABIES Act also requires that when any restroom doesn't have a changing table, hallway signs must direct parents to the nearest facilities. The act came in response to a resounding call for equality in parenting resources.

Back in October, one dad went viral after posting a photo of himself struggling to change his son's diaper in a public restroom and consequently became the face of a movement. Donte Palmer posted a photo to Instagram of himself changing his son on his lap in a bathroom with the caption, "What's the deal with not having changing tables in men's bathroom as if we don't exist! Let's fix this problem!" adding the hashtag, #squatforchange. Thousands of other dads were inspired by his post and went on to post their own photos of diaper changing struggles. "In society, we have this thing where men are supposed to be macho providers and protectors, while women are the nurturing and caring ones. I'm trying to shred that," Palmer told CNN.

It was Sen. Brad Hoylman who first introduced the New York law that would provide changing tables in men's rooms, and he shared much the same sentiment as Palmer when he did so. In his statement, he confronted unfair parenting norms:

It’s not just moms who change diapers. Dads need to step up and do their part of the dirty work, too. Governor Cuomo and the legislature are taking an important step in recognizing changing parental norms, including a new generation of gay dads like me who no longer should have to change their babies on the bathroom floor because there’s no changing station in the men’s restroom.

Providing fathers with access to changing tables empowers them to be active participants in taking care of their children. Kudos to New York for taking a step towards progress.