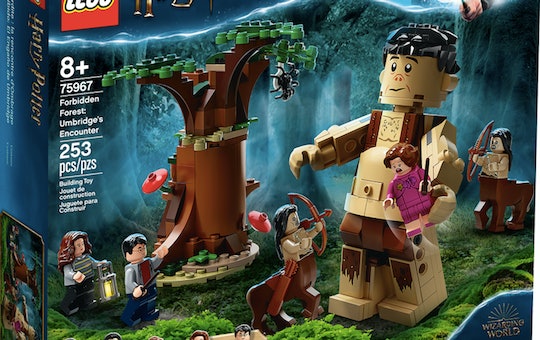 If, like me, you spent hours upon hours building the multiple thousand-piece LEGO Hogwarts Castle last year, you will know and understand the joy that is Harry Potter LEGOs. Well, get your building fingers ready because LEGO is expanding their Harry Potter sets, and most of us have more time than ever to build them — and will for the foreseeable future. If only there were a "quietus" spell to cast upon your children as you build.

Preorder for the sets begins on April 30, with sets launching on Aug. 1, and I'm just assuming that these six new sets are going to sell out fast. Each set represents a moment in time in Harry Potter's journey, and they work with the other LEGO Potter creations. Each set will range from $40 to $100, and from just under 200 pieces to over 1000. They are pretty intense, and other than the Hedwig set, they are all traditional LEGO dimensions. (Hedwig is huge, and we love her for it.)

There will be a Room of Requirement set for $20 made up of 193 pieces, and it will include three minifigures — Harry Potter, Hermione Granger, and Luna Lovegood (yes, she's bringing the weird) as they train for Dumbledore's Army. Next up is The Forbidden Forest for $30 with 253 pieces. The Forest has three minifigures — Harry Potter, Hermione Granger, and Dolores Umbridge. But there's also a not-so-minifigure in a 5" Grawp, everyone's favorite half-brother giant. A $40 Hedwig set is made up of 630 pieces and builds to a wingspan of over 13 inches, with a beak-to-tail measurement of over 7 inches. That is one big LEGO bird. This is the last of the small sets, and the next series of sets is much bigger.

For the larger sets, there will be a 4 Privet Drive set for $70, and it's a whopping 797 pieces with six minifigures — Harry Potter, Ron Weasley, Dudley Dursley, Vernon Dursley, Petunia Dursley, and Dobby. Will Dobby be given a sock? Only you can decide. Next is the Hogwarts Astronomy tower for $100, which totals 971 pieces and includes the minifigures of Harry Potter, Hermione Granger, Horace Slughorn, Luna Lovegood, Neville Longbottom, Ron Weasley, Lavender Brown, and Draco Malfoy.

The real whopper set depicts The Attack at the Burrow, and is also $100. It has 1,047 pieces including eight minifigures — Ron, Ginny, Arthur and Molly Weasley, Nymphadora Tonks, Bellatrix Lestrange, Fenrir Greyback, and Harry Potter. It's a stunning set and I can't wait to get frustrated with it because I've mixed playing with LEGOs and drinking wine.

If you buy all the sets (you will), you will have a surfeit of Harry Potters, Hermione Grangers and oddly Dolores Umbridges. However, any fan can tell you that those aren't actually all Harry and Hermione. (And that many Umbridges is a nightmare. In fact, the collective noun for Dolores Umbridges is "a nightmare of Umbridges.") The duplicates are just a bunch of Weasleys that have taken Polyjuice potion to look like Harry and Hermione.