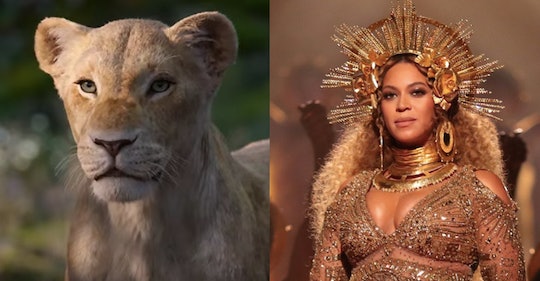 In a very exciting development, Beyoncé released a new Lion King trailer on Tuesday, officially debuting her role as Disney's Nala. Considering it's the first time fans have heard her as the iconic character, it's not too surprising that people are freaking out at the moment. Prepare to feel major goosebumps, folks.

“Simba, you have to take your place as king,” Nala, aka Beyoncé, says in the trailer, according to Variety. “We need you. Come home.”

Ugh, I can't even take it. Beyoncé was made for this role.

Interestingly enough, Beyoncé channeled the Lion King at Tina Knowles Lawson's annual Wearable Art Gala over the weekend. For the ball's "A Journey to the Pride Lands" theme, the songstress donned a gold catsuit featuring the face of a lion, a stunning ensemble that she completed with a cape, according to People.

Hmm ... maybe this was Beyoncé's subtle way of letting fans know that something special was on the horizon? The mom is a big fan of hidden messages, after all.

Beyoncé's impressive fashion sense aside, fans are losing it over her portrayal of Nala.

"Me listening to Beyoncé as Nala in the new Lion King trailer as if I don't already know exactly what her voice sounds like," someone captioned a hilarious GIF of Oprah Winfrey crying.

Another commenter tweeted: "BEYONCÉ IS FINALLY TALKING IN A LION KING TRAILER. YES WITH YOUR DEEP VOICE."

Of course, Beyoncé isn't the only star in the film. The trailer also highlighted Billy Eichner (Timon) and Seth Rogen's (Pumbaa) hilarious performances, a bit that occurs right after the closing credits. I think it's safe to say these two actors are going to kill it — it's clear they have a fun chemistry together.

But as talented as Eichner and Rogen are, Beyonce's performance has seemingly stole the show. Eichner touched on this sentiment in March interview on the Keep It podcast, revealing that he cried upon hearing Beyoncé's rendition of "Can You Feel The Love Tonight."

"I've heard her sing 'Can You Feel the Love Tonight?' with Donald Glover and, I'm telling you, it's f—ing good," he shared, according to POPSUGAR. "And that was never my favorite song to be totally honest ... I liked it when Elton John sang it. I love Elton John. I don't want to give too much away about that. They're very — they do not want us talking about it. I will just say that, honestly, it made me cry and I was not expecting that."

Phew, I couldn't be more thrilled for when the Lion King hits theaters on July 19. I don't know about you guys, but I need more Beyoncé as Nala in my life.