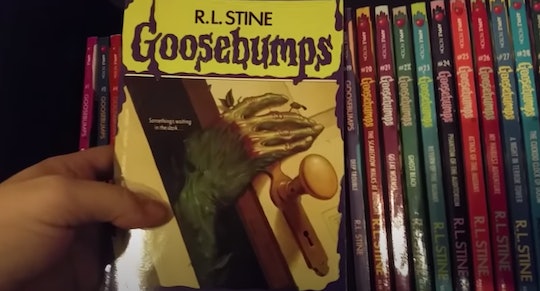 ATTN: A New Live-Action ‘Goosebumps’ TV Series Is In The Works

Everyone's favorite slightly scary childhood book series is coming to the small screen. Yup, a live-action Goosebumps TV series is apparently in the works and it's obviously going to be amazing.

The young adult book series from the 90s, which follows kids getting into spooky situations, will be headed to your TV screen in the near future. Deadline reported that Scholastic Entertainment producer Neal H. Moritz and Sony Pictures have teamed up to bring R.L. Stine's beloved book series to life for a new audience.

"Goosebumps has been keeping kids and families on the edge of their seats for nearly 30 years, and we're excited to partner with Sony Television and Neal H. Moritz to bring the enduring brand to life in a fresh way for today's generation," Iole Lucchese, Scholastic Entertainment President and Chief Strategy Officer told Deadline.

While this is exciting news, it's important to note that the series is only in the pre-production phase, so many details are unknown at the moment, like whether the series will tie into the 2015 Goosebumps movie starring Jack Black that was also based on the books.

One thing is for sure: there's tons of material the Goosebumps TV series could cover. Stine wrote 62 books in the original Goosebumps series plus dozens more in different spin-off series since the first Goosebumps book was published in 1992. With titles like Goosebumps: Why I'm Afraid of Bees and Goosebumps: The Cuckoo Clock of Doom, each story is a little scary, a little quirky, and still fun for kids to read almost 30 years later. "I don't really want to terrify kids," Stine told NPR in 2015. "Whenever I have something I think is kind of intense, I throw in something funny to lighten it up."

This isn't the first time Goosebumps has made its way to TV screens. The original Goosebumps TV series ran from 1995 to 1998, with each episode telling a new spooky story. Then came the Goosebumps movie in 2015 and Goosebumps 2: Haunted Halloween, which was released in 2018.

So while we wait for the new Goosebumps TV adaptation to debut, you can stream all four seasons of the original Goosebumps TV series and Goosebumps 2 on Netflix. The 2015 Goosebumps movie is also available to rent on Amazon if you're looking to complete your Goosebumps marathon.