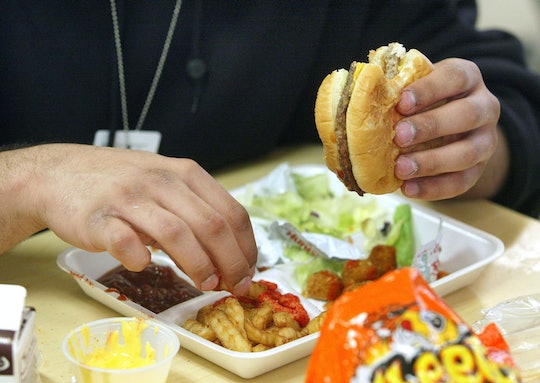 A senator in New Mexico proposed a first-of-its-kind legislation that would protect kids from "lunch shaming" practices in the state's schools. While the school lunch program is seen as an opt-in aspect of the American public education system for many families, some families can't afford to take advantage of it and kids go hungry — and experience discrimination — as a result. In some schools students are expected to work in exchange for a meal, or are denied food outright if they don't have lunch money. New Mexico passed a law to prevent lunch shaming or forced chores for kids at school, but the practices still exist in schools across the U.S.

Sen. Michael Padilla of New Mexico introduced the legislation because he has personal experience with the phenomenon of lunch shaming in the U.S. public school system, according to NPR. He said he was in foster care as a child and recalled mopping the cafeteria floors in exchange for school lunch. While many schools throughout the U.S. offer free or reduced lunch programs for kids from low-income families, if a child's family gets behind on payments or can't supply lunch money, kids can be denied access to the program. In some schools, a child may be forced to return their lunch if money is owed, according to The Atlantic. In many cases, this happens at the cafeteria register — and the lunch is just thrown out. Around 2,200 U.S. schools do offer universal free lunch under the Community Eligibility Provision, according to the most recent data which was collected in 2014. That's a mere fraction of the near 100,000 public schools in the U.S., according to the National Center for Education Statistics.

New Mexico's Hunger-Free Student's Bill of Rights Act aims to make sure that every student has access to the lunch program — including free or reduced-cost lunch, if their family is eligible. It also prohibits schools from throwing out a child's lunch if they are unable to pay, or forcing them to perform work in exchange for a meal. Padilla hopes that other states might use his bill as a template to create protections for kids in their schools.

A survey conducted by No Kid Hungry in 2015 found that 3 out of 4 public school teachers reported having students who regularly come to school hungry. Teachers also reported that these children have a harder time focusing in class, tend to be sick more often, and are more likely to demonstrate behavioral problems. Not to mention that any child who isn't getting proper nutrition is at risk for developmental and other health problems, according to the World Health Organization.

While some schools might balk at the idea of providing free lunches for all students, New Mexico's law isn't expecting them to: it lays out guidelines for helping families pay what they owe, according to The New York Times. At heart, though, the law isn't about money — it's about making sure adults and schools aren't holding children responsible for economic circumstances over which they have no control. It's horrible to embarrass a child in front of their peers, but it's another level of cruel to deny them food when they're hungry. While creating laws to help schools navigate the finances of school lunch programs is understandable, there's something disconcerting about the fact that schools in the U.S. need laws to tell them shaming and denying food to children is never justified.