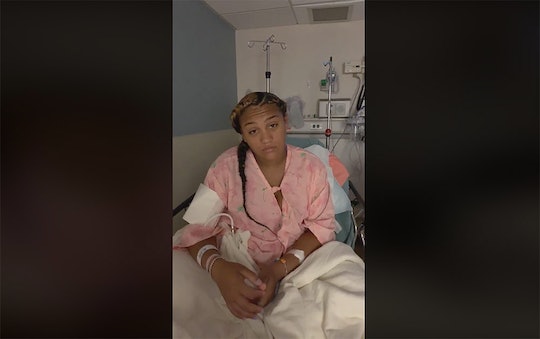 There are plenty of delivery stories gone wrong, but one mom's harrowing experience is enough to make anyone break out in a cold sweat. In an unbelievable turn of events, this new mom says an epidural needle got stuck in her back post-delivery, causing her to experience "agonizing pain" and distress. Um, can you say ouch?

Selena Gray, an 18-year-old mom, gave birth on June 26 at Sacred Heart Hospital in Pensacola, Florida, according to The Epoch Times. But instead of leaving the hospital with her beautiful baby girl, Serenity, she remained hospitalized for days after an epidural tube used to administer anesthetic via a catheter got stuck in her spine, according to Gray's Facebook post. Yikes.

“Basically, my epidural looped itself into my spine,” Gray told Fox News 19. "It’s in a knot in my spine, and they’ve been trying to tug at it and tug at it. I haven’t been able to get up or move or do anything.”

After two days in the hospital, doctors were unable to remove the tube and she was transferred to Baptist Hospital, according to People. But staffers at Baptist refused to remove it for unspecified reasons, Gray alleged in her post.

The new mom eventually went home without any answers as to when the tube would be removed, and that's when her situation took a turn for the worse. Gray's mom, Patricia Alvarado, shared in a Facebook post, according to Cafe Mom: "Selena came home yesterday, and currently could not walk with out a walker. She can’t stand up and hold Serenity at the same time."

Sadly, Gray wasn't able to do all the things a new mom looks forward to after giving birth, like holding her baby. Alvarado continued:

This morning which is Day 6 is a completely different story. She is in such agonizing pain she couldn’t use the walker to get up, she had to be lifted up off the couch, and is crying in pain. She is not doing to good and she is very scared and upset she can’t barely walk and she is in agonizing pain. She is also very upset she can’t just get up and pick up Serenity. Someone has to bring Serenity to her.

Luckily, one last hospital offered to step in and help. After a six hour drive from her home, staffers at the University of Florida Health Shands Hospital were able to remove the rogue epidural tube, requiring an incision and several stitches, according to Gray. Although this whole ordeal sounds terrible, the upside is doctors were able to fix the issue.

Gray's not alone in her decision to use an epidural for pain management during child birth. Case in point: Dr. Aaron Caughey, chair of the Department of Obstetrics and Gynecology at Oregon Health and Science University, told Live Science in July 2016 that approximately two-thirds of pregnant people choose to get an epidural. But, will Gray opt for this procedure again if and when she has another child? Only time will tell.

It's been a wild ride for Gray, to say the least, but she has those precious newborn days to look forward to. And I wish her nothing but the best as she recovers from her epidural mishap.