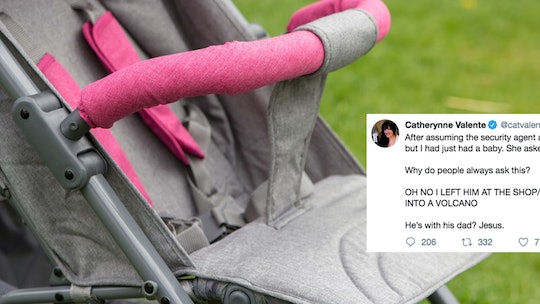 Parent's Response To A Stranger Asking Her "Where's The Baby?" Is Every New Mom

Few things in life are as awkward (and infuriating, for that matter) as questions from strangers about your pregnancy. Because for some inexplicable reason, people think they're entitled to know everything about your body. And it's clear they're already making assumptions before they do so. I mean, who would ever think it's OK to ask a complete stranger, or even a casual acquaintance, "Are you pregnant?" And in this vein, a new mom's reaction to a stranger asking, "Where's the baby?" is basically all of us.

Fantasy and science fiction novelist, Catherynne Valente, took to Twitter to share a frustrating experience she recently had with a security guard. And unfortunately, her situation is the perfect example of why it's never okay to ask a woman if she's pregnant.

"After queuing for three hours, the security guard patting me down ran her hands over my stomach and conversationally asked if I was pregnant," Valente tweeted on Aug. 19. "No just fat but thanks so much for that really appreciate it exactly what I needed I’ll just go stick my head in a jet engine shall I."

Ugh, seriously?! I don't even know this woman personally, and I'm already seething on her behalf.

As if that weren't awkward and embarrassing enough for everyone involved, Valente was asked another "innocent" question. And boy, this one was a doozy.

"After assuming the security agent assumed I was pregnant, I told her no, but I had just had a baby," she wrote in another tweet. "She asked where the baby was. Why do people always ask this? OH NO I LEFT HIM AT THE SHOP/SOLD HIM TO A FAIRY/PUNTED HIM INTO A VOLCANO. He’s with his dad? Jesus."

Valente's sentiments seem to have struck a chord. A father chimed in with a similar situation, except from the dad's point of view. "When my boy was just an infant, we were driving around town, while my wife coached her softball team," he commented. "A cop pulled me over — brake light out or something — and, when he looked in and saw it was just me and my kid, asked, 'Where's his mother?' I should have started weeping."

A fellow mom chimed into the conversation to share how she approaches this particular question (which is genius, by the way). She commented, "This used to bother me so much when my daughter was newborn. I started telling them I didn’t know. Shut them up."

Yet another Twitter user replied, "'Idk Karen, after they cut the umbilical cord so i'd stop dragging him all over the hospital floors, I guess I just.. lost track of him?'" LOL.

Still another person pointed out one valid reason why no one should be asking a stranger, "Where's the baby?" They commented, "What if she asked that to someone who gave birth to a stillborn? I hate how people talk to women about pregnancy." Amen to that.

For the record, a person's midsection doesn't magically become flat the second they gives birth. It can time for their body to recover from growing an entire human. A person's uterus, for example, takes between six and eight weeks to shrink back to its normal size, according to BabyCenter. Not to mention, the extra pounds gained during pregnancy, as well as water weight. So it's quite common for a new mom to leave the hospital sporting what looks like six-months pregnant bump.

Also, newsflash: It's 2019. Dads are more involved in their kids' lives than they've ever been, and stay-at-home fatherhood is on the rise. It's becoming less common for fathers to be the sole breadwinners of the family. Also, same-sex couples exist. So what's with people expecting that babies should always be with their mothers?

The bottom line: Don't ask strangers if they're pregnant. Like, ever. Similarly, don't act shocked if a stranger tells you she has a baby, but the baby isn't with her. Same goes for a father who is out and about with his baby with no mother in sight. Because you know what they say about assuming...