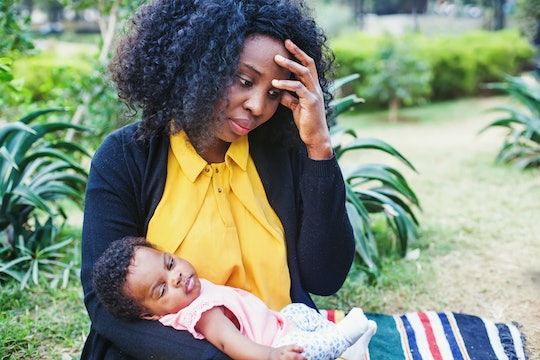 They say that a mother's worry never ends, and now there might be some research to help quantify exactly what that means. Indeed, new moms spend many hours stressing about their baby's health, according to a new survey, which also found just how many Google searches they conduct about anything health-related in their child's first year. And the numbers researchers found may help validate how you have felt or have been feeling with your bundle of joy..

Predominantly, and unsurprisingly, mothers are concerned about the infant's "overall health" (58 percent) as well as concerns about babies reaching proper milestones (54 percent) and the amount of milk or formula they are consuming (52 percent).

Other issues of concern ranged from whether or not they are growing as they should, whether or not they would have allergies in their first year, and so on. Regarding the lattermost point, the survey also shared that 76 percent of pediatricians said new parents are "lacking information" about allergies, which is significant.

The allergy issue is a point to note, as childhood allergies are on the rise, as The Guardian has previously reported.

"Surveyed moms may not have ranked allergies at the top of their list of health concerns because many aren’t aware that one of the most common infant allergies, cow’s milk allergy, is indicative of more allergies later in life," Jonathan Malka, Director of Allergy and Immunology at Pediatric Associates, said in a press release for the survey. "Allergies are on the rise, especially food-related allergies in infants and children. Babies with cow’s milk allergy are particularly susceptible to other allergies later in life — a phenomenon known as the allergic march. It’s vital that parents recognize and manage the allergy symptoms early to reduce the likelihood of a child’s future allergies."

Symptoms like a full-body rash aren't even in the top four signs of an infant allergy, according to WebMd, although it is often the symptom most recognized. In fact, signs of allergies include belly pain, coughing, diarrhea, fainting, hives or rash, nausea or vomiting, rash around the mouth, runny or stuffy nose, swelling of limbs, tight throat, or trouble breathing.

Aside from allergies, mothers in the survey also worried about the amount of sleep their babies were getting, whether or not they were adequately bonding with them, and what their different cries mean. However, according to the survey, the most common health issues that new moms actually experienced included diaper rash, cradle cap, fever, vomiting, baby acne, breastfeeding problems, ear infections, and colic.

What this seems to mean is that there's a bit of a disconnect between what moms worry about, and what they primarily experience. This doesn't mean that we need to think less about some of the real health issues that babies go through in their first months (such as allergies, for example) however, it does mean that we can all probably chill out a little bit and trust ourselves.