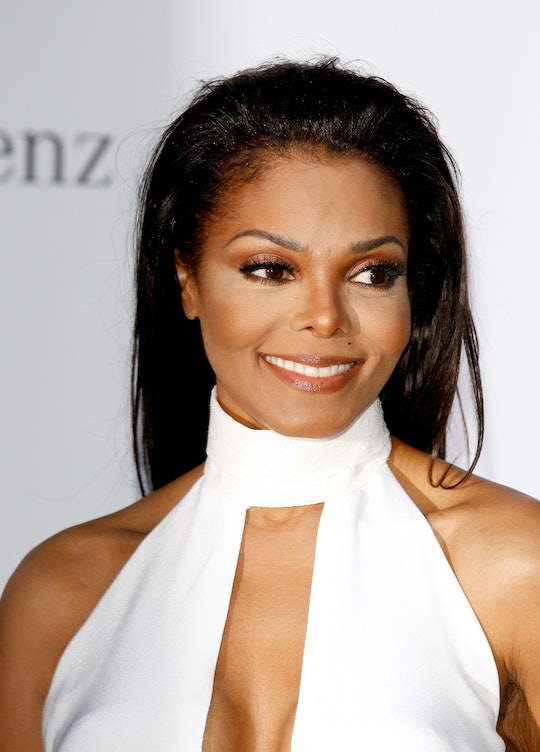 Most parents will tell you that there's nothing quite like the love you feel for a new baby. In fact, many describe the feeling of meeting their newborn as discovering a kind of love they didn't even know existed. It's definitely something that people would best relate to once they've been through it, and that's why new moms will love Janet Jackson's heartwarming description of the way she feels while holding her son.

In a recent interview with Billboard, Jackson shared all the good vibes she's experiencing in her life and talked a bit about her son, Eissa Al Mana. "While we’re talking about positivity, let me also say that my son, even in his short 17 months on the planet, has showed me that love, no matter how deeply you believe you have experienced that emotion, can always go deeper. Love is limitless," she said.

Jackson went onto explain that having a baby also changed her priorities, according to Billboard:

For someone like me, raised in show business where self-concern is always a priority, how fortunate I am now to be concerned, first and foremost, with the welfare of someone else. Day after day and night after night, holding my baby in my arms, I am at peace. I am blessed. I feel bliss. In those moments, all is right with the world.

Last year, Us Weekly reported that Jackson had given birth to her first son with then-husband Wissam Al Mana on January 3, 2017. A representative for Jackson shared with the magazine: "Janet Jackson and husband Wissam Al Mana are thrilled to welcome their new son Eissa Al Mana into the world. Janet had a stress free healthy delivery and is resting comfortably."

Jackson announced her pregnancy in a pretty unexpected way. Entertainment Tonight reported that she had to postpone her Unbreakable World Tour, telling fans that her doctors were telling her to rest. “Please, if you could try and understand that it’s important that I do this now,” she said in a video posted to Twitter. “I have to rest up, doctor’s orders. But I have not forgotten about you. I will continue the tour as soon as I possibly can." She continued:

We’re in the second leg of the tour and there actually has been a sudden change. I thought it was important that you be the first to know. My husband and I are planning our family, so I’m going to have to delay the tour. Please, if you could try and understand that it’s important that I do this now. I have to rest up, doctor’s orders. But I have not forgotten about you. I will continue the tour as soon as I possibly can.

Jackson told ET in 2008 that she did want to have kids someway. "I would love to have children of our own, but we also would love to adopt," she said. So, we'll see what happens. It'll happen someday." A few years later, in 2011, she told Piers Morgan on CNN that everyone told her she'd be a good mom.

"I hope I'd be a good mother," she began. "Everyone tells me, for the longest time, they’ve told me, ‘Oh, you’d make a great mother.’ And I’m like, ‘Why?'" she began, explaining that they would say: "‘You’re very nurturing. You’re very mothering and you take care of people all the time.’ And yada, yada, yada. And so, I don’t know."

It's so great to see that Janet's dreams of becoming a parent did come to fruition last year. The people in her life were right: judging by how much she loves her baby, it's apparent that she's an amazing mother already.