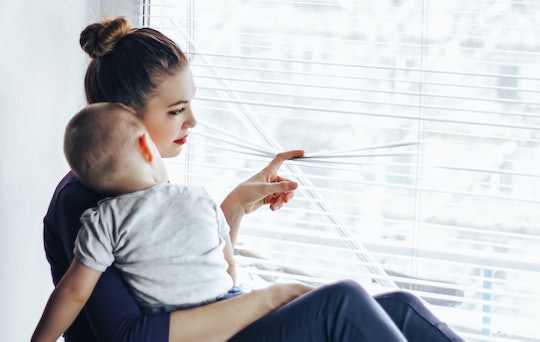 There’s plenty of advice and research on how new and expectant mothers can keep their bodies in ideal shape for their babies, but there’s not as much emphasis placed on how mother’s can take care of their mental health. According to Post Baby Bodies’ recent study only 47 percent of women surveyed are concerned about mental health. But, 1 in 9 moms are affected by postpartum depression, so why isn't our healthcare system and the public conversation about postpartum mental health showing equal concern for the mental health of mothers?

Postpartum Depression (PPD) is a mood disorder that affects women after childbirth. Its symptoms can vary, depending on the severity of the condition, but most people report feeling anxiety, extreme sadness, and levels of exhaustion that may make it difficult to care for themselves, let alone a new baby. Sometimes, PPD is colloquially referred to as the “baby blues,” but those are actually two separate conditions.

The baby blues is fairly common, affecting around 80 percent of mothers. On the surface, it may seem to show the same symptoms of PPD; fatigue, worry, and unhappiness, according to Fit Pregnancy. However, the baby blues is a reaction to the daily demands of providing for a baby, and those mild feelings are expected to disappear on their own within a few weeks. On the other hand, PPD’s symptoms can be more extreme, often interfering with someone’s ability to care for themselves or their family. And, unlike the baby blues, PPD symptoms are unlikely to simply fade away over time, usually requiring treatment.

Historically, the United States has struggled with providing adequate maternal health care. Increased reporting of the struggles that mothers face has helped shine light on the issue, but troubling data still remains. Maternal mortality is defined as the death of a woman during pregnancy or within 42 days after delivery, where the causes are directly or indirectly related to pregnancy. Most high-income countries have seen maternal mortality rates fall over the years, but the United States has seen our rates double since 1990, according to the New England Journal of Medicine.

This statistic highlights worrisome trends occuring in the world of sexual and reproductive health, including our reluctance to address mental health with mothers. Although there’s no specific information on how many cases of PPD lead to suicide, we do know that untreated mental illnesses are the number one cause of death by suicide.

The reasons why someone may not receive treatment for PPD vary and no one should cast judgement. Some people may know they have PPD, but fear that their children will be taken away if they are open about their struggles. After all, pregnancy and childbirth are always framed as something you have to be endlessly excited about. If you aren’t, or have the slightest bit of anxiety and concern, it calls your entire position as a parent into question.

Some hospitals give mothers tests, like the Edinburgh Postnatal Depression Scale. Although I don’t have children, I have been tested for conditions like ADD as a child, and I can tell you with confidence that it’s easy to lie to paper. Most of us have been in job interviews with personality sections, where we cross off answers that may not be 100 percent true, but we know are what they’re looking for. If there’s no effort put into educating parents about PPD, and removing surrounding stigmas, these tests cannot be completely trusted.

And, for some, it’s simply difficult or impossible to receive the treatment they need. With increasing cuts in insurance policies, and national unemployment rates sitting at 4.1 percent, it’s not always as easy as just calling a psychologist. But, for those with access, online resources like Postpartum Support International can be of assistance.

Traditionally, maternal health care has approached mothers as place-holders; their bodies now exist for the baby and nothing matters beyond that. Media have reported stories like the husband stitch, which show how little concern is given to someone’s agency after they have given birth, and reflects the larger attitude around maternal health. It’s why we see a focus on what expecting parents should eat, how they should exercise, etc., but it’s radio silence when it’s time to address maintaining mental health. But, we know that this simple reduction has negative consequences, like an alarmingly high mortality rate.

Mental health care needs to be understood as an integral part of maintaining the whole. It makes people uncomfortable to realize, but for as mysterious as the brain is, we know it’s an organ. And organs can get sick; they can misfire, malfunction, or just behave in ways that don’t hold up with the norm. There’s no inherent shame in that.

For all the emphasis we place on bodies, it’s time we understand that no person is just an incubating tool. PPD and its symptoms is unlikely to ever go away completely, but the point of mental health care isn’t to recklessly eradicate. Mental health care exists so people may come to understand the symptoms they are presenting and figure out healthy ways to cope.