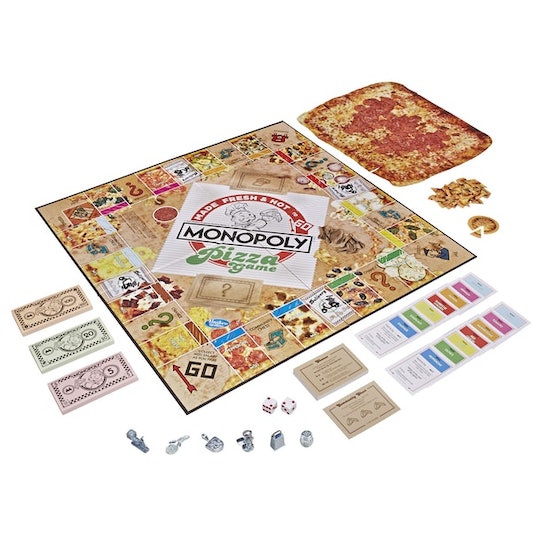 Just in time for Christmas, there's a new Monopoly game board being released. Forget Boardwalk and Park Avenue, because this one's all about everyone's favorite food. The new Monopoly Pizza game just might leave you hungry for more.

The object of the game is a little different than regular Monopoly. Instead of trying to bankrupt your opponents in the classic game (which, in my own personal experience, too often leads to someone getting mad and smashing the board), your goal is to earn the most pizzas — or "rack up the dough", as the box says. Instead of snapping up properties, you buy slices. You aim to collect a full color set which puts together full pies like veggie lovers, barbecue chicken, or mac and cheese. Earning a full pie gives your cards a higher value, which is tallied up when the game ends as the last slice is bought.

You still get to pull Chance and Community Chest cards, and you've still got to worry about ending up in jail. Instead of the familiar game tokens to move around the board like the top hat and race car, however, the new game's token are pizza-related and super cute. They include a slicer, cheese grater, and cheese shaker. The game box itself even looks just like a pizza boxed up and ready for delivery, which is an adorable touch.

The game is recommended for ages 8 and up, and is designed for two to four players. Games like this one are a great option for family game nights, not only because they're fun but also because they're a good way to sneakily educate your kids. They'll be forced to work on their math skills as they add up the Monopoly bucks needed to pay for their latest slice, and figure out a budget to see if they can afford an olive piece (40 Monopoly bucks) or a pepperoni (50 Monopoly bucks).

Hasbro, the company behind Monopoly, has been very creative in recent years about releasing special editions of the game that cater to specific interests. There's a Disney edition, a 'Star Wars' edition, a 'Stranger Things' edition, and many, many more. There's even a junior version of the game designed for younger kids, which includes an electronic banker. All told, there's over 300 editions of Monopoly according to CNN.

Buying and selling different commodities is the common link going back to the earliest versions of the game, the history of which might surprise you. Smithsonian magazine noted that the very first prototype of the game was thought up in 1904 by a woman artist and inventor named Lizzie Magie. She called it "The Landlord's Game," and intended it to show players the evils of getting rich at other people's expense — a lesson that some players definitely take to heart, as demonstrated by the aforementioned board smashing. Luckily, the Monopoly Pizza game isn't quite as cutthroat, so I doubt you'll have to worry about any of your players revolting.

The game is available at Walmart and Amazon and retails for $20.