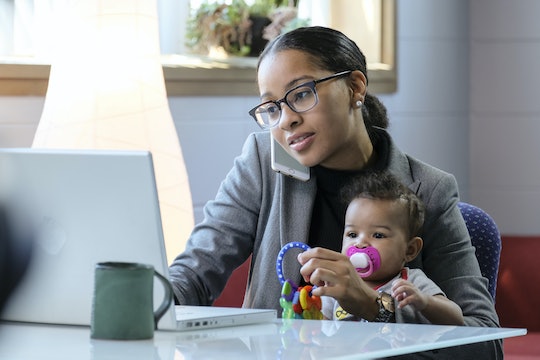 Women Tend To Underestimate The Challenges Of Being A Working Mom, Study Suggests

Becoming a parent presents a ton of new experiences and challenges. Late-night feedings and diaper changes and sleep deprivation, oh my! And, according to a new study, many new mothers underestimate the difficulties that parenthood — especially in terms of balancing parenthood with working — will present. The most interesting aspect of this, the study's authors believe, is that this underestimation may be why a decreasing number of women are in the workforce.

The study, posted on the National Bureau of Economic Research's website, and conducted by Ilyana Kuziemko (of Princeton University), Jessica Pan (of the National University of Singapore), Jenny Shen (of Princeton University), and Ebonya Washington (of Yale University), is a working paper, which means it is still in progress and not yet officially published, according to Princeton's website. In the study's abstract, the authors point out that even though more women than ever are equipped for the workforce, the amount of women who are actually in the workforce has leveled off in various wealthy countries over recent years. Specifically, in the United States and Britain, the authors witnessed a decreasing number of new mothers in the workforce, the New York Times added.

A graphic on the Federal Reserve Bank of St. Louis' website, shared by the New York Times, provides a great visualization of that plateau. As seen in the graph, between 2000 and 2010, women's participation in the workforce in the United States has remained at around 59 percent. Since 2010, that number has jumped around between about 59 percent and 56 percent.

So, what accounts for this? The authors hypothesize that when women are making career-related decisions, they tend to underestimate how much motherhood will affect their ability to work.

Another view that tends to change after women become mothers (and cease working) is how they view mothers who do return to work. For example, the researchers note, these women are more likely to believe that moms who work have a negative impact on the family. Overall mothers were more likely to give "traditional" answers regarding their views on this topic than other women, according to the New York Times. “Motherhood serves as an information shock to their beliefs,” the researchers suggest.

In a 2015 paper written by Claudia Goldin and published by the Center for American Progress, she suggests that people who work extremely long hours are often the people who make a ton of money, the New York Times reported. That means that new mothers, who may not have the time or energy to work such long hours, often experience a pay cut, which may eventually cause them to quit their jobs to be at home with their children, and rely on their partner for the family's income.

In a 2013 op-ed for The Atlantic, author Paulette Light wrote about her experience returning to the workforce after becoming a mother. "I was missing out on key moments in my daughter's life and I was an exhausted, nervous wreck," Light wrote of her 100-hour-a-week job. "Getting the job done was all about giving everything to the job, and that wasn't sustainable for me once I had a child." She left work after delivering her second baby, and she was ready to return to a full-time career after her fourth child went off to kindergarten. However, her training, which was for a high-power leadership position, is "one where you can't really pickup where you left off after being absent for over ten years. By leaving the workforce, I lost all of my accumulated experience and expertise," she wrote.

Light's story emphasizes that the present workforce in the United States does not make it easy for women to return to their careers after becoming mothers — and that is definitely something that needs to change. Perhaps the ideas suggested in this new study will help with that.