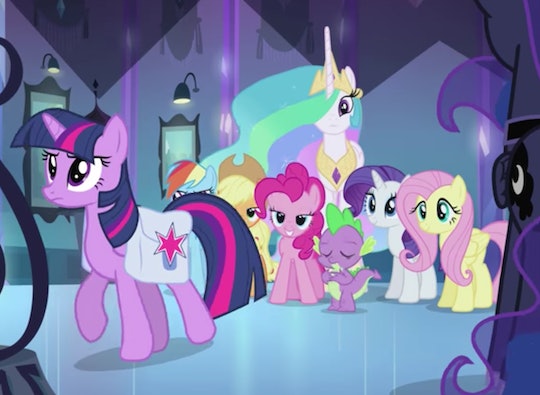 In case you somehow didn't know, My Little Pony is like, a really big deal right now. Yeah, it was a big deal when we were kids, too, but now it's like a really, really big deal. The My Little Pony: Friendship Is Magic show, which debuted in 2010, is still going strong; there was a full length movie last year, and of course, the toys are hotter than ever. In fact, My Little Pony is launching a new line of toys this fall that's definitely going to find its way to your playroom (and if you were a fan way back in the day, you might be secretly thrilled).

That's right, you heard it here first: There's a whole new line of ponies on the way! Featuring characters your kid already knows and loves from the TV series, the My Little Pony Ultimate Equestria Collection will hit stores sometime in Fall 2018 and includes 10 figures: Twilight Sparkle (and sidekick Spike the Dragon), Fluttershy, Rainbow Dash, Rarity, Pinkie Pie, and Applejack, plus Princess Celestia, Princess Luna, and Princess Cadance. So many favorites in one box! And how about the power of nostalgia: I just felt a little thrill when I realized that I had an Applejack figure back in the '80s. No wonder My Little Pony is still popular! And seriously, they couldn't be cuter:

Of course, these characters have come a long way since the '80s. Back then, Applejack was just another plastic horse in my stable; I didn't know anything about who she really was as a pony. Remember these guys??

How times have changed! Now these ponies all have very distinct personalities. Applejack, for example, is "honest, friendly and sweet to the core," according to Hasbro's My Little Pony website.

But what about some of the other characters in the Ultimate Equestria Collection?

Twilight Sparkle is the friend to go to if you need help with your homework, apparently, as she's a "super smart pony and a natural born leader."

Fluttershy is "kind and gentle" (but a little shy, as her name implies). Rainbow Dash, meanwhile, is "always ready for an adventure." Rarity "enjoys designing fashionable clothes for her friends to make them look as fabulous as they are on the inside," and Pinkie Pie "loves eating sweets and throwing parties for all her friends" (so you for sure want those two on your squad).

All pretty standard pony stuff so far, but things get a little more complicated when you get into royal territory. As the site explains, "Princess Cadance is the ruler of the Crystal Empire. Her love has a magical quality that combines with the magic of her husband, Shining Armor to make them nearly unstoppable." Then there's Princess Celestia, the ruler of Equestria, who's known for being "wise and kind" (ideal qualities to have in a ruler). But Celestia's little sister, Princess Luna, brings the drama: Apparently "jealous to live in her sister's shadow," she turned into the villain Nightmare Moon. It's all good, though, because she was "reformed by the powerful Elements of Harmony so she can stay close to the My Little Pony town."

Yikes! Sounds like some pretty intense pretend play could be in your kid's future! No specific launch date has been released at this time, but since the Ultimate Equestria Collection will be available sometime this fall, it's safe to say this set will be an extremely hot ticket item next holiday season. (That is, if My Little Pony fans can even manage to wait for Santa.)

In the meantime, you'll just have to make due with the many, many, many other My Little Pony toys that are already for sale — or in your house!

More Like This
Teacher Shot By 6-Year-Old Student Told School He Had A Gun, Was Told To "Wait"
13 Aquarius Baby Traits & How To Support Your Little Water Sign
Mom On TikTok Asks Daughters Why They Want To Be Boys & Same, Girls, Same
When Does A Baby Recognize Their Father? A Pediatrician Explains
What Parents Are Talking About — Delivered Straight To Your Inbox