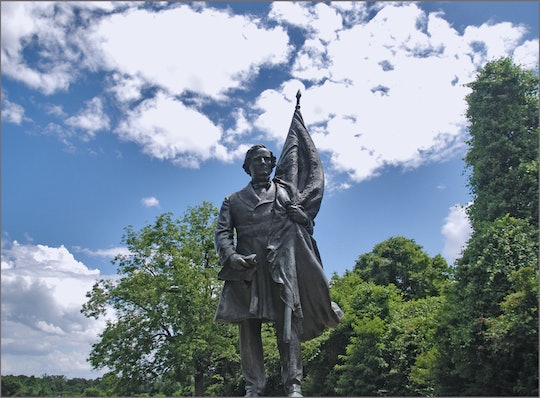 In a 6-1 vote on Thursday, the New Orleans City Council supported a new ordinance in New Orleans to remove four Confederate monuments around the city. This inculdes three statues honoring Robert E. Lee, P.G.T. Beauregard, and Jefferson Davis, as well as a monument to the battle of Liberty Place (in which a white supremacy group briefly overthrew the government). Many Confederate-flag supporters say moves like this are attempting to eliminate history, but that's just not true. The New Orleans' ordinance is yet another necessary step toward eliminating symbols of racism within the U.S.

I truly hope the ordinance won't be as hotly contested as South Carolina's recent decision to remove the Confederate flag from its state capitol. While some people might genuinely see such symbols as representative of state pride, to many, they're hurtful, hateful images that glorify a dark time in America's history when black people were enslaved and brutalized because of their skin color.

Even if Confederate symbols are simply about honoring local history, it's important to examine this history and ask whether its something the country should be honoring. Americans can debate all day long on what the Civil War was "really" about, but everyone can agree, I hope, that at least one component was slavery. Alexander Stephens, the vice president of the Confederacy, called slavery the "cornerstone" of the Confederacy, according to the Washington Post. That's not something to take pride in.

Moreover, the Confederates lost. In Boston, Bostonians don't have a statue of Red Sox player Bill Buckner with the ball rolling between his legs during the 1986 World Series. Native Bostonians are ashamed of that moment, and rightly so. They lost. They conceded defeat. And then, they moved on. And that was only a baseball game. When Confederate flag supporters still insist that their team — which enslaved an entire race of people, a horrible legacy whose effects are still felt by black Americans hundreds of years later — should be remembered because "it's history," it not only makes them sore losers, it seriously calls into question their moral judgement.

Claiming that the Confederates deserve honor and glory is, by definition, condoning their actions. It's condoning slavery. And sentiments like that have no place in modern America. It's time to admit that.

And now, it seems, New Orleans has. They've finally realized (or, at least, 6 out of 7 have) that there's no pride to be found in being on the wrong side of history, and the only way to move on from a terrible past is to look forward and learn from that past. Now let's hope that more cities follow suit, because there are a lot of Confederate monuments still standing.