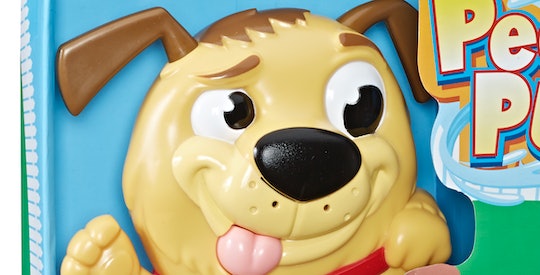 Your kids are about to have some glorious time off from school for Thanksgiving and Christmas, and Hasbro Gaming officially has your back. Just in time for those long, looming, unstructured days, they've come out with a new game that's sure to keep everyone entertained (for a little while, at least). A clever twist on the classic Hot Potato, Hasbro's new Peeing Pup game combines potty and puppy humor... so your kids will definitely be hooked. And, no judgment, but the adults in the family just might be hooked, too.

The fun in this game lies in the adrenaline rush. You know that intense feeling of anticipation (and healthy anxiety) you get when the music is about to stop in Musical Chairs, or when the Catchphrase timer starts beeping rapidly to indicate time's almost up? That's the vibe of this game. I don't care how naturally cool as a cucumber you are, when the clock (any clock!) is running out, your blood pressure will start to rise.

In Peeing Pup, kids (and their caregivers) take turns passing the dog around the circle, as a press release from Hasbro explains. When the dog is in a player's hands, they have to pet it on the head (and the dog makes some adorable sounds while they do it). When the puppy barks, the player passes it to the next person. So, what's the catch? "Pass the pet, but don't get wet!" You never know when the dog is going to pee all over the player holding it! The player that manages to stay dry for the entire game is the winner.

(And if you're one of those parents who's hesitant about making messes, don't stress. The amount of "pee" that comes out of Peeing Pup is no big deal; at least, not in terms of making a mess. The shrieks from your children may make it seem like a torrential amount!)

If your children are anything like I was at a child, they may or may not have "puppy" at the top of their Christmas list... every year. If they aren't quite ready for the real thing, Peeing Pup seems like the ideal compromise. Besides, Peeing Pup is also the perfect forewarning for a child begging for a puppy. Ask them, "Do you really want something peeing all over you?! If so, I know the perfect game we can play!"

The game will be sold for $20 beginning on November 1, available at Walmart and all other major retailers nationwide, as well as online at HasbroToyShop.com beginning January 2019. The game requires two or more players, and is intended for children ages four years and up. It also requires three "AAA" batteries, so make sure to have those in your possession if you don't want to have some extremely impatient kiddos on your hands! While I've already suggested it as the perfect way to keep kids occupied over those wonderful days out of school, it'll also make a great Christmas gift for the various kids in your life. And trust me, any adult that gives kids a peeing pup game is automatically a cool adult.

It seems like every generation has their own share of bizarre games that become massive hits. From Operation (seriously, why did that guy have real butterflies in his stomach and a wrench in his ankle?) to Mall Madness (teach children about crippling credit card debt early!), the creativity of these game creators is mind-boggling. While hearing your kids excitedly yell, "Let's play with Peeing Pup!" might seem odd at first, it's bound to become a common refrain in your household in the near future.