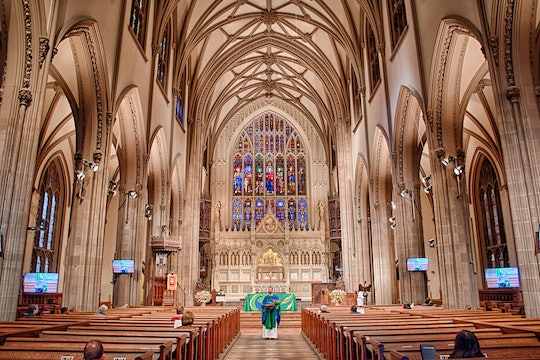 It's been a good year for acceptance and inclusion, which reached its peak in June, when the U.S. Supreme Court legalized gay marriage across the nation. Now, a study from the Pew Research Center shows that acceptance of gay people is rising across Christian groups. This includes members of Christian groups that have historically been strongly opposed to homosexuality and categorize such relationships as sinful.

The study found that the majority of Christians — 54 percent of them — now say society should accept queer people rather than work to discourage it. Let's all go ahead and breathe a sigh of relief as we work towards a more inclusive world.

Religion as a whole is changing altogether in the United States — there's been a drop in overall levels of religious belief in the past seven years, and millennials admit they now see Christmas as more of a cultural event than a religious one, according to the Pew Forum. One reason behind these changes is that the U.S. is predominantly made up of younger generations. Last year, the number of 22-year-olds outnumbered any other age category in the United States, and millennials are now more plentiful than baby boomers, according to CNN.

The increase in religious acceptance of homosexuality is mostly due to this increase in younger church members, according to the Pew Forum. The Pew Research Center pointed out that 51 percent of millennial evangelical Protestants are accepting of homosexuality, while only one-third of baby boomers and one-fifth of the silent generation feel the same way. Which makes sense — this generation's parents thought their parents were ridiculous for supporting segregation and opposing women in the workplace, while younger generations are far more open and supportive of homosexuality and the LGBT-rights movement.

This is an awesome reminder that the country is moving in the right direction, but there's still a ways to go. LGBT couples still face discrimination in some states when it comes to marriage and adoption, according to The Atlantic. In some places, people are still dealing with the Kim Davises of the world, who ignore federal law and refuse to marry gay couples, or states like Michigan, Texas, and Florida, which allow adoption agencies to legally refuse gay couples.

However, the changing religious tides towards acceptance point to an overall movement for a more inclusive and accepting society. That is great news.