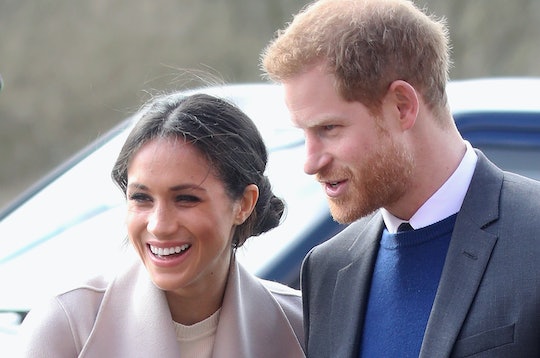 Not much is known about the Duke and Duchess of Sussex's early romance, as they've made it a point to prioritize their privacy. But fans recently got a glimpse into their pre-engagement life when Meghan Markle and Prince Harry shared new photos to Instagram Monday, highlighting their trip to Botswana in 2017. And the breathtaking snaps prove the couple has always been dedicated to activism.

Shortly before Markle and Prince Harry announced their engagement in November 2017, they took a trip to Botswana, a landlocked country in South Africa. At the time, the trip was reportedly planned to celebrate Markle's 36th birthday on Aug. 4, but it looks like the two were there for another important reason involving the conservation group Elephants Without Borders (EWB).

While there, the couple learned about tracking collars used by EWB to "track the elephants, as well as to learn their essential migratory patterns to keep their corridors safe and open so future generations of elephants can roam freely," according to the Duke and Duchess of Sussex's Instagram post.

The duo also shared photos of their efforts, including one shot of Prince Harry walking towards an elephant with a kit of some kind, and another of Markle's hands placed on an elephant's trunk. "Two years ago on World Elephant Day, The Duke and Duchess of Sussex joined Dr Chase to help in this conservation effort," the Instagram post reads.

As the post outlines, the couple are committed to spreading information about the EWB's work, a cause that's also close to Ellen DeGeneres' heart. The Duke and Duchess of Sussex shared:

Today is #WorldElephantDay and we are pleased to announce that since we followed our friends at @ElephantswithoutBorders (EWB) on Instagram in July, when we were celebrating the environment, you and our friend @TheEllenFund(@TheEllenShow) have spread the word and EWB have been able to help protect 25 elephants by fitting them with satellite navigation collars!

Of course, these conservation efforts and information about EWB are very important. And these new photos prove that activism has always been a big part of Markle and Prince Harry's relationship, even before they got hitched. It's clear the two share the same worldview. Sharing a similar perspective is what allows a couple to go the distance in a marriage over time, or at least that's how it seems to me.

It's wonderful to bare witness to the Duke and Duchess of Sussex's shared foundation, as well as their efforts to preserve the world's few remaining natural wonders and creatures.

As for the couple's supporters, they applauded their conservation efforts.

"Meghan, you both are a great example of the change we all want to see in the world. You two inspire us to be as well. Thank you," posted one user.

Another one noted: "Harry and Meghan, ACTIONS will always speak louder than their critics WORDS. Keep shining."

Speaking of Africa, the Duke and Duchess of Sussex are planning an official royal tour of the continent this fall with baby Archie in tow, according to People. Stops will include Malawi, Angola, and return trip to Botswana, an area that's so close to the couple's heart. It's also possible some of Meghan's wedding ring diamonds were sourced from the area, as Town & Country magazine reported.

And while it's not immediately clear whether the two plan to check on these majestic elephants while on tour, you can be sure they'll continue their activist efforts. Prince Harry recently met with conservationist Dr. Jane Goodall, for instance, regarding her work to develop solutions for environmental sustainability. Not to mention, their new foundation, Sussex Royal, is in the works.

All in all, it's obvious the Duke and Duchess of Sussex are dedicated to doing great work in the world. And these new photos from their 2017 Botswana trip are a reminder of the couple's long commitment to activism.