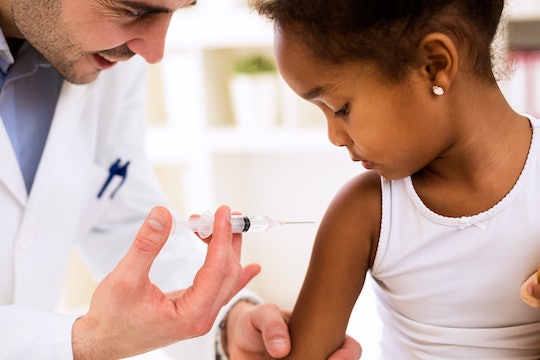 It's no secret the anti-vaxx movement has had serious consequences in the United States. The spiking cases of measles is all the proof you need. And yet, an alarming trend of parents dismissing the safety and effectiveness of vaccines continues. Which is exactly why the spread of misinformation surrounding vaccines must stop. And thankfully, this new podcast series on vaccinations and anti-vaxxers tackles the disturbing history behind the recent measles outbreaks.

Let's just get one thing out of the way right off the bat: Measles was declared eliminated in the United States back in 2000, according to CNN. Allow me to say it in a different way: Less than 20 years ago, measles was not present in this country.

So what changed, exactly? Many say it's due to the anti-vaxx movement, combined with the rapid spread of the misinformation associated with it. Like the false claim that the MMR vaccine causes autism, which has been repeatedly and emphatically disproven, as TIME reported.

To give you an idea of just how serious the situation has gotten, the latest U.S. Centers for Disease Control & Prevention (CDC) count is at 695 confirmed measles cases so far in 2019 — meaning we're officially in the midst of the largest outbreak since 2000, according to CNN. What's more, the World Health Organization (WHO) declared "vaccine hesitancy" as one of the top 10 threats to global health in 2019. Heck, it's gotten so bad that city officials in outbreak areas have even threatened to fine unvaccinated individuals, as CNBC reported.

Which brings us to where we are today. Thankfully, though, an upcoming podcast series will explore exactly how we got here.

The third season of WBUR's Endless Thread podcast — in collaboration with Reddit — will feature a special four-part series titled, "Infectious: The Strange Past and Surprising Present of Vaccines — and Anti-Vaxxers."

The podcast series will include reporting in Clark County, Washington, where Gov. Jay Inslee recently declared a state of emergency because of a measles outbreak, according to WBUR. The series will also feature an interview with Joan Donovan, director of the Technology and Social Change Research Project at Harvard Kennedy School’s Shorenstein Center, and Dr. Paul Offit, director of the Vaccine Education Center at Children’s Hospital of Philadelphia.

“Our series takes a deep dive into the controversy, looking at everything from the early discovery of vaccines and the first anti-vaxxers, to the way the digital age has created new platforms to amplify the opposing voices,” Iris Adler, executive director for programming, podcasts and special projects at WBUR, said, according to the news outlet.

Adler continued, "Endless Thread takes podcast listeners way beyond the headlines and reductionist arguments to understand how these opposing forces came to be. This series underscores Endless Thread's unique and powerful storytelling; every episode is its own surprising documentary about everything that's weird, wonderful and disconcerting about the Internet."

So when can you catch the series? According to WBUR, here's a breakdown of what to expect and when:

I don't know about you, but I'm setting a reminder for myself to tune into the "Infectious" series on Endless Thread. Because I can't, for the life of me, wrap my mind around the fact that parents are refusing to vaccine their children despite the scientific evidence that they're safe and effective. The deadly spread of misinformation — and vaccine-preventable illness — must stop, and now.