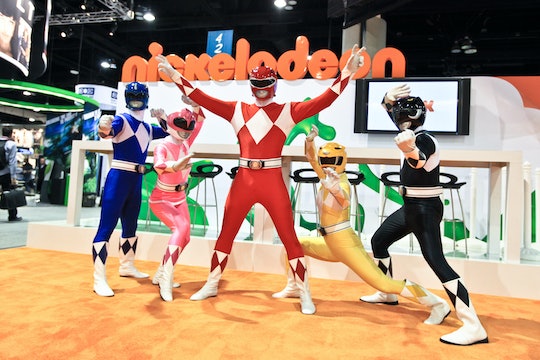 Rita Repulsa better watch her back: The original teenagers with attitude are looking flashier than ever in their armor for the upcoming film reboot of the long-running children’s tv series. The new Power Rangers outfits, which were revealed in a photo shared by Entertainment Weekly this week, are definitely not the original brightly colored spandex suits from the '90s. And on Thursday, fans took to Twitter to express their collective disappointment, excitement, and all-around confusion.

Mighty Morphin’ Power Rangers first aired in 1993 and has been running strong ever since (the show just celebrated its 800th episode in October). Power Rangers, which takes much of its current action sequencing from the Japanese tokusatsu Super Sentai, follows a group of high school kids who save the world from an evil witch, Rita Repulsa (played by Elizabeth Banks in the reboot), using their alien-gifted super powers (not to mention some seriously kick-ass martial arts skills). In this week's interview with EW, show-runner Dean Israelite explained why the new, armored suits perfectly suited that original spirit.

“The show was about kids coming of age, about metamorphosis,” reboot director Dean Israelite told EW this week. “These suits needed to feel like they were catalyzed by these kids and their energy, their spirit.” In that vein, the Power Rangers reboot’s extraterrestrial armor will crystalize around the Rangers’ bodies—they literally grow on the teens—whenever they need to kick some serious butt.

Don’t worry, the kids are still rocking the same colors as the originals—presumably so kids can pick which one they want to be while playing (I was always the Pink Power Ranger). However, the modern uniforms look more like robotic armor—some are comparing them to Iron Man’s super suit—than latex Halloween costumes.

Though radical, at least the film’s updated uniforms look like they might actually offer some protection during a fight. That being said, whenever there is a big change to something that evokes nostalgia, fans immediately want to voice their opinions online, and Power Rangers fans are no different — some love the new look and others, not so much (with female suits that employ both breast-shaped armor and what appear to be built-in heels, can you blame them?).

Here are some of the best Twitter reactions to the new Power Rangers' uniforms:

The Mastermind Behind The New Uniforms

In Case You Couldn't Tell Which Ones Were Girls

Keeping Everything In Perspective

However you feel about the new Power-suits, don't forget that all of this is just fictional, with no real impact on your life. Almost.