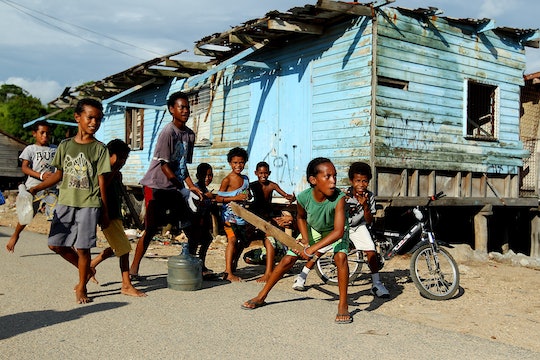 Best & Worst Places To Be A Kid

When you consider both historical and modern day issues plaguing the world right now, it’s no surprise that this new list of the best and worst places to be a kid hasn't really changed over the years. With European countries dominating the top 10 list of where a child's life is least threatened and sub-Saharan Africa ranking in at the bottom — and the United States not appearing on either list — the recent report from Save the Children serves as an important reminder that a lot still needs to be done to improve the lives of children all over the world.

The report looked at several factors such as the prevalence of child marriage and pregnancy at a young age, children who are forced into hazardous work, preventable illnesses — such as pneumonia, diarrhea, malaria, and other deadly diseases that could be treated with immunizations — as well as the rate of child mortality and the lack of educational opportunities due to poverty and crises.

“Childhood should be a safe time of life for growing, learning and playing. Every child deserves a childhood of love, care and protection so they can develop to their full potential,” according to the Save the Children report. “But this is not the experience for at least a quarter of our children worldwide.”

Here's what the report found based on where childhood is least and most threatened:

Best Countries To Be A Kid

Worst Countries To Be A Kid

"Children in these countries are the least likely to fully experience childhood, a time that should be dedicated to emotional, social and physical development, as well as play," the report said of the 10 bottom-ranked countries, seven of which are from West and Central Africa. "In these and many other countries around the world, children are robbed of significant portions of their childhoods."

Meanwhile, all of the countries in the top 10 list are in Europe, with the exception of South Korea. And the United States came in at No. 36 — one ahead of Russia and just below Bosnia and Herzegovina — for countries with few children missing out on childhood. According to NPR, the United States didn't make the top 10 list because it "doesn't spend as much on early childhood education and other social programs for children."

Although the United States is one of the better countries to be born in, another report from Save the Children from earlier this month still found that millions of American kids are being denied the opportunity to have a childhood after considering factors such as infant mortality, high school dropout rates, violence, and malnutrition.

Worldwide, however, this report shows just how "tremendous" the gaps in quality of life are between between rich and poor countries and further shows "the urgent need to accelerate progress for the most vulnerable children," according to Save the Children.

The report concluded with recommendations for all world leaders to follow. Whether it's ending discriminatory policies to ensure every child is treated equally or stepping in to make things like access to food, quality health care, and education a top priority, the aim is to achieve one goal: Every kid should have the opportunity to live a happy, healthy, and safe childhood.